Moonlight on the Thames 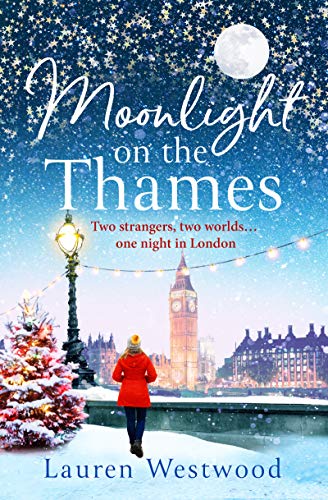 2000s: Sometimes you meet someone at a station you’ll never forget…

Worlds collide when two strangers meet at Waterloo station. It’s a moment they’ll never forget. Christmas is a joyous time, but not everyone is merry and bright. Nicola is a star at the top of the corporate ladder, but her personal life is a disaster. Her office affair has run its course, and the last thing she wants to think about is Christmas. A night of cancelled trains and festive Christmas carols at Waterloo Station is the last straw… Dmitri loves conducting his pop–up choir during the festive season, meeting people, and spreading joy and cheer around London. But he carries deep secrets from his past that robbed him of his dream to become a concert pianist. Can two lonely hearts and souls be unlocked by music and moonlight and will they discover the healing power of love?

It’s a magical time to be in the capital. Snow is falling,Christmas carols are being sung in the station, the London Eye is twinkling over the city and down below the shoppers are rushing around for last minute gifts, whilst the Christmas markets are in full flow. It’s all so magical in the crisp outside and very romantic to sip mulled wine and eat food outside. Maybe go skating at Somerset House?

There’s something in the air in this novel!

Nicola encounters Dmitri for the first time here. It’s amazing who and what you see at a train station at Christmas time. When you’ve just found out you’re train is delayed however, you’re not really going to be in the mood for a choir and carols..

However, it’s an important first meeting in many ways. It’s the start of maybe not the journey Nicola was expecting, but it takes her across the city on a romantic trail with some very unexpected diversions!

Try the market here as in the novel. Nearer Christmas time, it’s transformed into a Nordic-inspired wonderland with twinkling lights, stalls and food and drink. Very like the picture on the cover of the book.

A magical place to see the city at any time of year but at Christmas, the views of a frosted covered city are very nice. You’ll be able to see the Christmas markets and the Winter Wonderland in Hyde Park

A very Christmassy place in the city. There’s a skating rink during the festive months and Christmassy music. There’s some interesting history here too : Edward Seymour, Lord Protector and Duke of Somerset, started building a palace for himself on the banks of the Thames back in 1547. It became Somerset House and has played host to several companies and organisations over the years. It was even used as grace-and-favour apartments, offices, storage and stables in the early 1700s.

It’s the ideal setting for some skating and Christmas charm in the novel.

Nicola lives in Richmond on Thames. It’s a lovely place to visit just outside of  the city. Richmond was founded following Henry VII’s building of Richmond Palace so it’s got royal and regal connections. Richmond Green is where Nicola and Dmitri spend time in the novel.