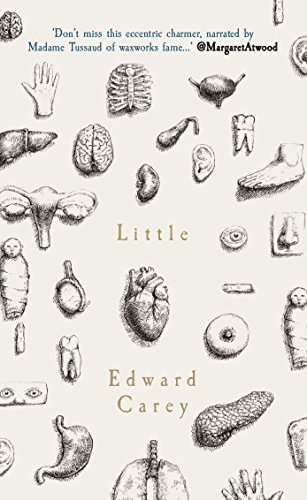 In 1761, a tiny, odd-looking girl named Marie is born in a village in Alsace. After the death of her parents, she is apprenticed to an eccentric wax sculptor and whisked off to the seamy streets of Paris, where they meet a domineering widow and her quiet, pale son. Together, they convert an abandoned monkey house into an exhibition hall for wax heads, and the spectacle becomes a sensation. As word of her artistic talent spreads, Marie is called to Versailles, where she tutors a princess and saves Marie Antoinette in childbirth. But outside the palace walls, Paris is roiling: The revolutionary mob is demanding heads, and . . . at the wax museum, heads are what they do.

What a tour and immersion into the city of lights and love! during the time of the novel, its said that it was called Lutetia, the city of mud.

“this great mess of roofs,this great confusion of buildings and of  people. this melting pot, this great sink down which everything is poured…”

“You can see prisons – behind us, the monstrous oblong of the Bastille.”

Here in time, Little carved in stone.Greatest monument of our city, most famous of buildings. Wisest and most complicated of buildings. Or, do you not think, with the flying buttresses coming out from her sides and behind like so many arched legs, that she resembles a  great spider athwart this thick and complicated web of Paris, fed by her visitors who leave small coins of charity.”

This iconic palace and museum plays a major role in the novel and it’s lusciously described and evoked. Marie goes her to teach Princess Elisabeth and so says ” On Paris I turned my back”

“It was a whole city made of a single building. How to navigate such a thing?

Wait until you see where she sleeps….

Then there’s the Monkey House at 20 Boulevard de Temple

It was a wooden building that stood hard by the city wall, with a deep ditch along inside side In rather gaunt letters, it boasted of its purpose : House of the world-famous Pascal, The Philosopher’s Primate – alive!

Oh the things you will see inside….

Same can be said for this place…which the novel is all about and where the story leads us to:London

“My home is in Baker Street, which is only fitting, for in our way, we also cook people.”

“Down below, out of the sunlight, in the cellar, in the dark, we keep other people, the disgraceful ones, the ones who didn’t behave well.”

Remember: “ Wax does not know how to lie”

Marie Tussaud died in her sleep in London on 16 April 1850 at the age of 88. There is a memorial tablet to Madame Marie Tussaud on the right side of the nave of St. Mary’s Roman Catholic Church, Cadogan Street.

I don’t think I’m read such a fascinating book in a long while. It tells the tale of how Marie Tussaud grew from a girl in a little French village and became the woman who gave us the famous wax work museum.

The story is fascinating in itself particularly the time spent in revolutionary paris at the Monkey House… The city comes alive in sight, sounds and smell. It’s a city of bones, the streets each a bone linking the body, head and indeed soul of a city, stinking in its own filth. Marie’s first impression of the city are raw and visceral. How she sees the world….you are definitely going to want to see her view of Paris, its veins, its underground sewers and the meshing up of souls and death. It’s a dark, chilling world but I couldn’t take my eyes off the pages, nor could I stop looking at the gruesome sketches which pepper the text. They’re very graphic and gory but brilliantly evoke the rawness of the words they accompany.

Then it’s the splendour of Versailles where  she sees the wealth and splendour of the city. It’s interesting that the war is ravaging the  city outside, whilst those within these walls feel protected. This contrast will later prove to be the soul of Madame Tussaud’s museum.

Words can not do this novel justice, which is odd given that it’s the words in the novel which make this amazing story even more of a treat. I loved everything about it. It’s impressively written, the sketches are stunning and the way the entire books sucks you in to a grim gothic world is nothing like I’ve ever experienced before. I didn’t just read this book, I experienced it.