Herself Alone in Orange Rain 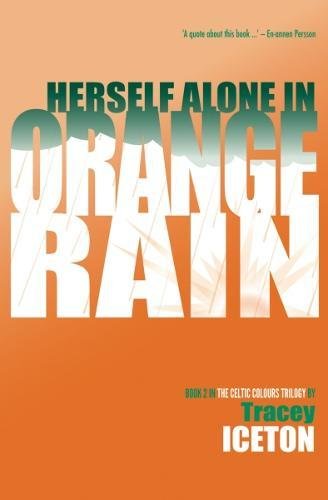 2000s: the story of one young woman s fight for freedom and independence, for her homeland and for herself.

Kaylynne Ryan is a promising art student, used to fighting for her place in a world of men, but when a forgotten friend turns up she realises there is more than her own freedom at stake.

Learning the truth about her Irish heritage, her grandfather who fought all his life for Ireland s independence, her parents who gave their lives for the same cause, she finds herself drawn into the dangerous world of the Provisional IRA with its bombing campaigns, bloody violence, hunger strikes and patriotic sacrifice. She didn t look for the Troubles, but they found her nonetheless, and now, whatever the cost, she must join the cause to help rid the Six Counties of the Brits.

Ireland and the Troubles

The whole of the trilogy is rooted in historical fact, stories that, although them seem incredible, really happened.  And for that reason the novels, especially Orange Rain, feature many real life locations as the fictional action in my novel plays out in parallel to those real life events.  So for readers interested in trailing Caoilainn Devoy as she goes about her covert IRA operations here are some key places to visit, in roughly the order they appear in the novel.

Caoilainn goes twice to the cottage near Rosmuc, in rural Galway, that was once owned by Patrick Pearse, one of the leaders of the 1916 Easter Rising.  She visits there while holidaying with Aiden, drawn to the cottage by a family connection.  Later, she needs to decide whether or not to continue being an active service IRA volunteer, so goes to the cottage to think things through in the solitude of the Connemara countryside.

Today it is a museum to Pearse, done out as it was when he owned and visited it.  Caoilainn gets a private tour inside on her second visit, and reflects on the green and unspoiled Ireland that Pearse died for and which she and her comrades are fighting for still, even though many of them would never have seen it for themselves.  Even today this is a cottage haunted by ghosts past.

Caoilainn has to drive out to this little seaside town on the coast of the Northern Ireland to pick up Connor, a fellow IRA volunteer, who has just escaped from HMP Maze.  Years of imprisonment have taken a terrible toll on Connor and Caoilainn is shocked by the realisation of what the life she has chosen takes from those dedicated to the cause of Irish Republicanism.

This complex of flats in Belfast have since been demolished although Divis Tower remains as a living reminder of the larger complex, still towering over west Belfast.  Because the residences were mainly Catholic it was the site of IRA activity and British soldiers were frequently installed in empty flats to carry out surveillance.  Caoilainn is called there to confront a British sniper who has been spotted by an elderly, Republican, Mrs Murphy.

Once Caoilainn is a known IRA volunteer she has to change her identity in order to keep operating for the movement.  To do so I moved her to a small village in County Tyrone where she would be unknown and where she is able to reinvent herself as a housewife.

Ballygawley is typical of a lot of small towns and villages in Northern Ireland in that it did not escape the Troubles.  In 1985 an IRA unit attacked the RUC station there so it seemed an appropriate place to move Caoilainn to in 1987 because, in her mind, the village has already had its troubles, ‘like growing pains’.

The Grand Hotel was the scene of an IRA attack in October 1984 when a bomb went off during the Tory Party conference, killing five people and injuring 34 others.  Patrick Magee was charged with the bombing in 1985 and as a result many details about the attack are in the public domain, including the fact that the bomb was planted a month in advance, set to go off during the conference via the use of a long range time culled from a VCR.  What isn’t known still is the identify of Magee’s accomplice although there was a suggestion that the unknown IRA volunteer was female.  In the novel this becomes my main protagonist, Caoilainn.

Today Carnlough feels a hundred miles away from the bustle of Belfast although it’s no where near that far away.  During the Troubles, when bombs were constantly exploding in the capital it must have felt a million miles away from all that, which is exactly what I wanted Caoilainn to experience for a moment, until the Troubles disturb her tranquillity with Connor’s approach.  She talks about trying to ‘pocket precious predawn peace’ but against the backdrop of war, her efforts are futile.  Today Carnlough is a peaceful wee town perfect for drinking in tranquillity and tea.