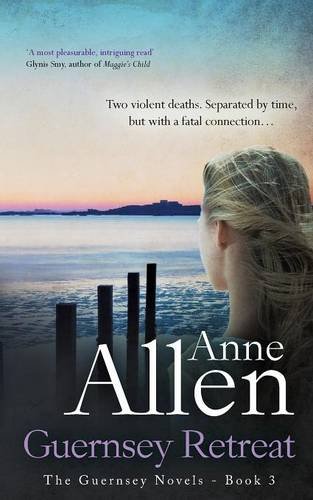 2000s: The third in the Guernsey novels series

A man loses his father. A young woman loses her mother. Both in tragic circumstances that lead, when they meet, to surprising revelations from the past.

Louisa needs to find the father she has never known, to warn him of possible danger – for them both. Her search takes her from England to Guernsey. Malcolm’s journey is more complicated: conceived in Guernsey, his bereaved mother emigrates with him to Canada. Many years later he arrives in India, and from here he is led back to Guernsey to open a health centre at La Folie. This was his father’s home and where he was killed at the start of the Second World War.

At the heart of the two deaths lie stolen jewels. Valuable enough to kill for. Twice.

Guernsey is an island in the English Channel just off the coast of Normandy.

It’s well known for beach resorts like Cobo Bay and the rugged coastal cliffs. There’s also a very strong literary link and not just with these novels – the famous Hauteville House is the lavish former home of French writer, Victor Hugo.

A very important museum to visit given the subject matter of the books. The first German aircraft arrived at Guernsey Airport on the 30th June 1940 and this marked the beginning of the Occupation.The island really has a lot to offer. You can take any one of the Guernsey novel books and sit on one of the many beaches. In between chapters, you can even go kayaking or surfboarding. There’s golf for the quieter moments (also good reading spots)