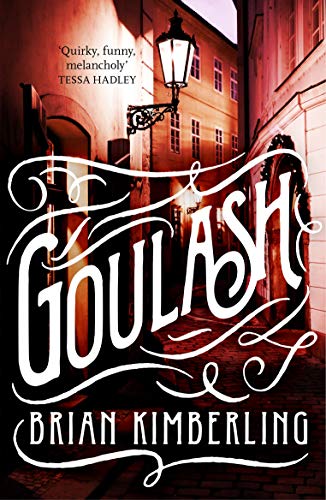 Eager to escape stifling small-town Indiana, Elliott moves to Prague, where he gets a job teaching English. It’s 1998, and the Czech Republic is moving with increasing rapidity out of the shadow of communism and into the wilds of twenty-first-century capitalism. Elliott meets his students in a variety of pubs and conducts his lessons over pints of local Radegast beer. He gets his shoes stolen by an experimental artist who engages Elliott in a number of eccentric schemes. And he meets Amanda, an English teacher from the UK, with whom he falls in love.

Together, they try to make a place for themselves as strangers in this strange land. They explore the dark history and surprising wonders of their adopted city, touring the twisting ancient streets and encountering expats, movie stars, tobacco executives, a former Soviet informant, and the president of Poland. But the forces that are reshaping the city are also at work on them, and eventually it becomes evident that their idyll must end – that change is the only reality one can’t outrun.

BookTrail your way around Prague  with Goulash!

This book is actually quite a good guide to the city given the number of places, streets and hidden corners woven into the story. Add the sprinkles of history and backstory and this is a guide with added interest!

A few places of note:

Kafta – Franz Kafka was a German-speaking Bohemian Jewish novelist born in Prague, widely regarded as one of the major figures of 20th-century literature. There’s a musuem, statue and many other places named after him. His presence lingers throughout the story.

Divoká Šárka –  nature reserve on the northwestern outskirts of Prague. This is the area of the city where the Slavs came to  in the 6th century. IT’s where Amanda and Elliot spend much of their time.

Zizkov – Elliot likens this part of the city to Brooklyn for its hip attitude and young feeling the place has.

The Old Town Square –  The iconic and the oldest part of the city. This is where a character tells the story of how the Soviet troops rumbled into the city. It’s also home to a statue of religious reformer Jan Hus, who was burned at the stake for his beliefs.

Then there’s the talk of the war:

“In school we all learned to use a watch as a compass so we could hide in the woods when the Americans came,” he said.
“We hid under our desks to prepare for you guys dropping bombs.”
“Wow,” he said. “Either you had a low opinion of our bombs or a high opinion of your desks.”