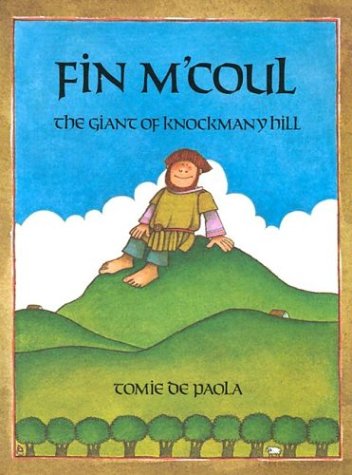 Timeless – How does a giant protect Ireland from the Scots?

Fin M’coul/ Fin McCool which ever spelling of his name you take, lives happily on the top of fictional Knockmany Hill in Ireland. He lives there with his wife Oonagh and they both spend their days working hard. Finn is working extremely hard on making a giant’s causeway which will link up Ireland and Scotland.

Cucullin, another giant in Ireland however, is a bit of a bully and comes to see

Fin, wanting to beat him up. Finn doesn’t know what to do, but Oonagh has  a little magic up her sleeve.

A great way to discover one of the most charming Irish folk stories. Finn is a big friendly giant who just wants the quiet life and to protect Ireland from any enemies. Working on the giant’s causeway is his goal and he works hard at this, making Ireland great and having a way of linking two countries.

He wants to live the quiet life up on that hill however and doesn’t want to fight. He’s managed to avoid Cucullin until now but peace in Ireland could be broken if things get out of hand.
Trust humble little Oonagh to get things on track. She uses wit and magic whilst one giant goes to bite off the finger of the other giant. Wit and wisdom versus brawn.

You can visit The Giant’s Causeway in Ireland, where the Irish believe is the path of basalt rock columns which Finn McCool built and worked on for years carving a beautiful place in the Irish rock.