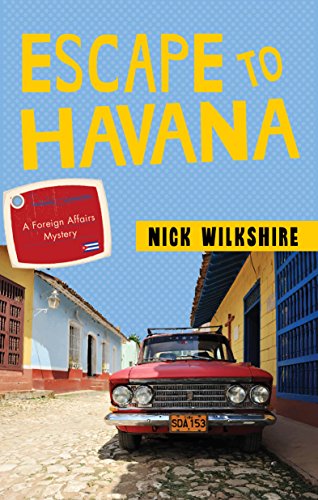 2000s: Diplomatic immunity might not save Charlie this time…

Ottawa bureaucrat Charlie Hillier is desperate for a change. He gets the chance to take a posting in Havana and so wanting to escape his career which has stalled somewhat since  the scandal about his soon-to-be-ex-wife’s indiscretions, he sees this as an escape as well as a new start.

However, once in Havana, events get more dramatic and stressful than those he left behind!  He finds a couple of kilos of cocaine under his bedroom floor, which is bad enough but then there’s the kidnapping of a fellow diplomat which turns his new world upside down.

There is also a rather unsettling connection between the former occupant of his house and a Colombian drug-runner. Charlie looks set to get his fingers burned.

Is this a posting or a roasting?

Cuba – From Ottawa to Cuba

A diplomatic posting should be a time of excitement and celebration and when offered the chance to spend a good amount of time in Havana, most people would jump at the chance. Charlie wants to go there as well as to escape the trials he’s endured in Ottawa.

And Cuba shines – the dilapidated buildings, the aromatic food,the faint sound of music in the old, faded streets and of course the waves of anti-Americanism which flow through them. An expat from the Diplomatic community you may think might have a different view of the world, but it doesn’t always have a different view of them. This Havana is hostile and distant as an undercurrent of something foreign flows through its veins. Just as well he’s not American otherwise what he sees and does would not of course be the same.

If you’ve ever wondered about what it’s like to be posted to a country and have to find your feet as well as start your new role, this is a fun if not dangerous look at diplomatic life. Havana sings, sizzles and shines in its heady portrayal of an island at the heart of North American politics but at the funny bone of Canadian Charlie Hillier.

Ooh this touched more than one nerve – as well as a funny bone. Having had some experience of working in foreign embassies abroad, there was a lot here that was so true, it brought back many laugh out loud moments as well as others which had me covering my eyes and holding my breath. I’m happy to say that there is a lot more slapstick and funny events in the book compared to real life – a LOT more – but the events and situations of his every day are familiar in spirit.

Charlie moves from Ottawa to Havana – two of my favourite places on earth and he expects Havana to be a rest! Well it’s certainly hotter than Ottawa and a lot more dangerous than Charlie realises. This is a light hearted look at events – I mean politically there is a light dusting of real history to the proceedings but the humour and watching a Canadian in Cuba is the real gem of the book.

The Canadian sense of humour, the Canadian spirit mixed with the Havana heat and twists and turns of both the political landscape as well as the streets made me want to stick a flag in it and declare it as a one to revisit.
Two cultures, two locations and a lot of diplomatic threads weaving it all together!

This is the start of a new series of adventures and I can’t wait to read more.

This is the start of  a new series of adventures and  I can’t wait to read more.