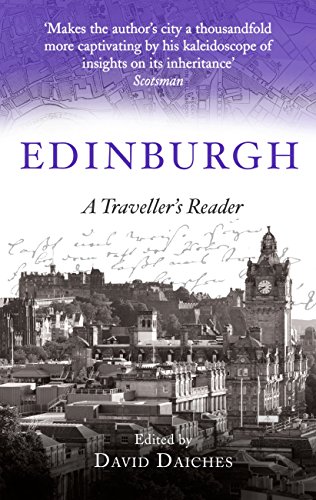 The city of Literature across the ages

Edinburgh is a city whose history is written on its face. The Old Town on its crowded rock, sloping down from the Castle to Holyroodhouse, has not significantly changed its atmosphere since the turbulent fifteenth and sixteenth centuries, when riots, processions, or public executions jammed the High Street. And the very different era that followed the bloody religious wars of the seventeenth century is epitomized by the elegant streets and squares of the New Town – the eighteenth-century Enlightenment whose writers, philosophers and lawyers made Edinburgh famous.

This anthology of extracts from letters, memoirs, diaries, novels and biographies of interesting visitors and inhabitants, including the writings of Scott, Boswell, Cockburn, John Knox and many others, recreates for today’s visitors the drama, the history, and the life of the city in buildings and places that can still be visited.

The book takes you on a tour around the city. Some points of note:

Of course on a more bookish note, it’s also the part of Edinburgh where J K Rowling wrote the first Harry Potter when she was penniless, in a cafe there. (and it does look a little Hogwarts too)

Edinburgh is a city of old and new and the new town takes the tour into another place – the modern sites of the city with literature links at its heart. The new town boasts some of the most modern and impressive buildings and green spaces in the city. Calton Hill is the place to go and see all the places on the map and the city at large.

The oldest part here is of course the Alexander Monument which you can and should walk up – it’s lots of stairs but stands in honour of one of the greatest Scottish writers. (Plus you can see the bookshops on Princess Street from here)

More literary links too – Trainspotting was set and of course filmed here. The novels of Oscar de Muriel are set along this street and the novels of Val McDermid and Ian Rankin cover this part as well as the old town.

The ideal companion to a wander around the city. Lots of history in this book and literature links from days gone by. Nothing modern day so if you’re looking for Harry Potter or Ian Rankin you will be disappointed.

There’s lots to chew over – lots of facts and in a good order so you can trail around the city and take the book along with you for a more fullsome experience. I’ve lived and trailed in Edinburgh but I felt I learned a lot from here and lots of facts I seem to have soaked up ready for the next quiz. I’ve passe Sciennes House many a time and never knew it was where Walter Scott met Robert Burns for example. I have walked up the Scott Monument and can still feel the ache in my thighs but what a view !

A solid guide to the city but it would have been better to have had more literary links in the modern day and not so much history. And I think a book like this needs photos or illustrations at least. It did have a map, so that was good.

There’s more of these in the series and I will definately be seeking them out!