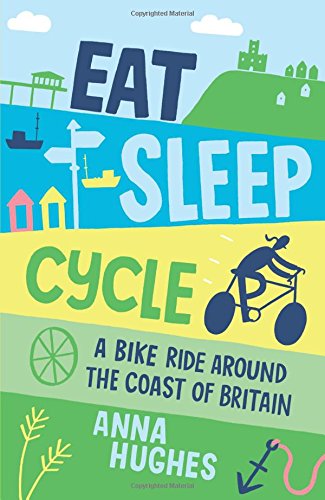 Love riding your bike? What about riding 4000 miles around the UK?

For Anna, a cycling enthusiast, the decision to ride 4,000 miles solo around the coast of the UK wasn’t that hard. Following the river from London until it became the sea, then following the sea until it reached the mouth of the Thames again was a beautifully simple idea. But after epic highs, incredible lows, unforgettable scenery and unpronounceable place names – as well as a hearty battle with some good old British weather – her simple idea turns into a compelling journey of self-discovery, and an eye-opening insight into what makes the island where she lives so special.

So many highlights! Britain is truly a beautiful place with many hidden gems. Standouts for me were the sand dunes of the Northumberland coast, Western Scotland – the mountains and the coastline are just incredible – and Devon and Cornwall – beautiful weather, very very tough cycling (with unbelievably steep hills) but breathtaking views and a rich blue sea.

Cruising the canals has shown me some beautiful parts of London and south-west England that we tend to zoom by ordinarily. However, it can be very hard work, as home comforts are not as easily as accessible as when you have bricks and mortar.

Living on a boat means being close to nature in the best and worst sense of the term. I adore my boat because it is cosy, quirky and peaceful.

What an inspiring book! The miles this woman cycles is quite amazing and what an interesting way to see the UK coastline! It really made me want to go and see all these places in this way – but it’s not an easy ride in any shape or form. Rain, wind, trecherous roads, saddle sores, tiredness and every other obstacle you could not hope to have, happens. But then that’s the beauty of this bycle taril – Anna tells you the highs, lows and everything in between and shows how to cope and carry on.

I love travelogues like this as not only will this inspired others to explore and ride a bike, it will also hopefully show the cycle paths that are sometimes hidden around the coastline.  Cornwall especially has some glorious ones that it really is the only way to see this part of the world. Shame that she encountered so much rain in Northumberland – my home county – but it wouldn’t be so green and lucious without it. Plus it’s how the Northerners are such good company – we’ve had our fair share of rainy days and stopping in to chat with friends.

You’ll feel that Anna is your friend by the end. A very personal and insightful account of why she decided to do this journey, how it was and what it felt like.  An adventure on wheels!