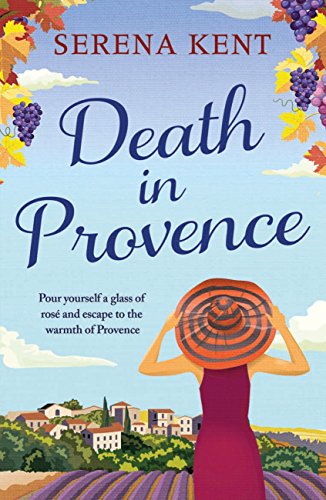 2000s: Escape to Provence for sun, rose and murder…

When Penelope Kite swaps her humdrum life in Surrey for a picturesque farmhouse in the south of France, she imagines a simple life of long lunches and chilled rosé . . . What she doesn’t imagine is the dead body floating in her swimming pool.

Convinced that the victim suffered more than a drunken accident, Penelope plunges headlong into local intrigue and long-simmering resentments to uncover the truth.

But with a meddling estate agent, an unfriendly Chief of Police, a suspiciously charming Mayor, and the endless temptation of that second pain au chocolat, life in the delightful village of St Merlot is certainly never simple. . .

When you come to the valley to get away from it all and enjoy the new life, you do expect a crumbling farmhouse and the quietness but not the murder! No, not the murder.

“The Cote d’Azur had long since become summer, but the Luberon valley was charming, Penelope had visited this area of Provence many times during the course of her marriage and had always been able to relaxing its sunny friendliness.”

“Churches and crumbling fortresses and narrow streets had the slumbering feel of the warm south and the orchards and vineyards below promised a land of plenty. The pace of life seemed more relaxed, less full of braying expats..”

Voila Le Chant D’Eau. the name of the property is The Song of the Water. It is an old farm”

“The property was  decrepit. A couple of substantial outbuildings were suffocating under thick ivy. The two-storey farmhouse itself was built of pale stone in the traditional style. The wooden window shutters were flaking lavender coloured paint.”

It’s located in the fictional but very nice sounding valley of Saint Merlot!

Apt is the market town of the region, with Roman origins visible in the amphitheatre under its medieval centre. On Saturday mornings, it has a huge market that has taken place in the narrow street and squares every week for 800 years. The ultimate Provençal market, full of the scents of lavender products and Savon de Marseille, goats’ cheeses, olives, tapenades, spit-roasting chickens, linens, tablecloths, pottery and magnificent displays of seasonal fruit and vegetables.

Saignon overlooks Apt from a fortress-like cliff. It has a gorgeous main street that looks like a set from a 1950s French film, and some sweet little restaurants.

Gordes is the queen of the Luberon perched villages, and often described as one of the most beautiful in France. In summer, it’s home to holidaying French politicans, showbusiness stars and Paris Match photographers. Nearly is the Abbaye de Senanque, the monastery that features on a hundred postcards, with its iconic rows of lavender up to the door and all around.

Bonnieux and Lacoste face each other from separate hills, sacred and profane: Bonnieux with its churches, the largest on the summit, another at the foot of the village; Lacoste with its ruined castle, once the home of the notorious Marquis de Sade, now owned by Paris designer Pierre Cardin, who stages operas there during festival time in the summer.

Ah it’s been a while since I was last in the Luberon valley but this brought it all home to me and more. A gorgeous evocative  and sumptuous visit to the valley with echoes of the lazy French way of life and the scent of the flowers in the fields, the food…oh the food…

But I digress, as this is more than just an evocative novel, it’s a nice murder mystery in paradise read with a nice central character in the form of Penelope.

It’s an easy read but one which evokes the setting and the murder within very well. Moving into a new property which needs work can’t be easy, and then to find a dead body there! Plenty of scope for a fun French set read. It was interesting to see the French police investigation.