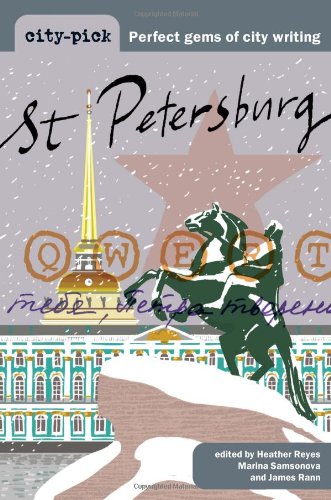 A collection that covers many major cities now comes to St Petersburg and what a guide around the city! This is the only guide that you really need – as more than 60 writers show us around their city or the  city they know and show us a side that many of us will not have considered before.

This is a booktrail – well many booktrails in one book. THE guide to seeing and experiencing the city in all its forms. Seen through the eyes of writers, you see the city in a completely new light and so much more interesting than a conventional guide book!

This is a literary guide which showcases Russian writers, writers who have based or set their books in this fascinating city and thereby giving you a view based on literary settings of a city you might never have considered before. With quotes, guide tips and writing about the city’s various spots, this takes you off the beaten track and into the city’s pulsating heart.

St. Petersburg is a dream of a city –

The founding of St Petersburg in 1703 was Peter the Great’s ‘I have a dream’ moment. He did, indeed, have a clear vision of the elegant, enlightened European-style city on the River Neva…

These short introductory texts lead nicely into the range of writers who each in turn give their impression of the city either in a short paragraph or a section of their book. Perfect for hoping in and out of as you would on a tour of the city itself.

Helen Dunmore is the first to take the literary stand –

Floating, lyrical, miraculous Petersburg, made out of nothing by a Tsar who wanted everything and didn’t care what it cost. Peter’s window on Europe, through which light shines. Here’s beauty built on bones. classical facades that cradled revolution, summers that lie in the cup of winter.

Malcolm Bradbury guides us to the Hermitage, Anna Pavlova describes her school days, Vladimir Nabokov re-lives a St Petersburg winter and Nikolai Gogol walks us down Nevsky Prospekt. Plus much more besides – it’s hard to write about the stories as you have to read them to see the full picture but they are all interesting in their own way and give you literary snapshots of a fascinating and beguiling city that few of us really can say we understand.

A trip through not only the city of St Petersburg but also of Russia and its past. Visit places in novels – not just of the one or two you may know such as War and Peace and Anna Karenina – discover more about Russian literature and authors, walk down the same streets and meet people from history.