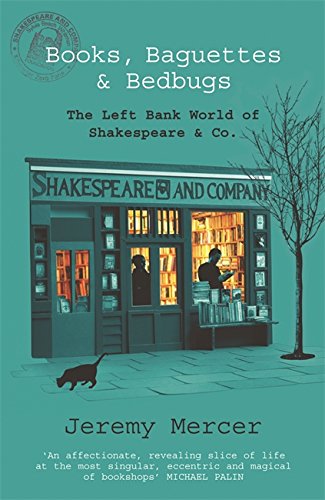 1900s: Enchanting memoir of a struggling writer living and working in the eccentric Parisian bookshop, ‘Shakespeare and Company’

‘Shakespeare and Company’ in Paris is one of the world’s most famous bookshops. The original store opened in 1921 and became known as the haunt of literary greats, such as Ernest Hemingway, F. Scott Fitzgerald, George Bernard Shaw, Ezra Pound, Gertrude Stein and James Joyce.

Sadly the shop was forced to close in 1941 when the owner, Sylvia Beach, refused to sell the last copy of ‘Finnegan’s Wake’ to an occupying Nazi officer. But this was not the end of ‘Shakespeare and Company’…
In 1951 another bookshop opened on the Left Bank. Called ‘Le Mistral’, it had beds for those of a literary mindset who found themselves down on their luck and, in 1964, it resurrected the name ‘Shakespeare and Company’ and became the principal meeting place for Beatnik poets, such as Allen Ginsberg and William S. Burroughs, through to Henry Miller and Lawrence Durrell.

Jeremy Mercer from Canada heads to Paris to see in the new millennium. He’s on his own with no friends etc but once he stumbles into a certain bookshop, well a new relationship has begun and the fairytale world of ‘Shakespeare and Co’ has opened up to him.

What follows is his tale of his time there, the curious people who came and went, the realities of being down and out in the ‘city of light’ and, in particular, his relationship with the beguiling octogenarian owner, George.

This book is a fantastic insight into George Whitman’s  bookshop in Paris. For this is not just a bookshop but an iconic establishment and meeting place for many of Paris’s finest writers and readers who just love to spend hours browsing the huge collection of books everywhere. There are not just books to see here but places to read, and even a bed for the night or two if you fancy. This is like a history book and a personal story of the store and its soul from its very beginnings and a fascinating bookish history about books, the store, its visitors and of course the owners

Mercer’s story as he encounters the shop takes you on a journey behind the scenes and into the very essence of the store. His friendship with the owner George and the writers who stay here is fascinating and it’s as if you were sitting beside them yourself listening in and dreaming. This is like a literary holy grail for Mercer plays a role in showing you the store from every angle and every nook and cranny showing you the clues and snippets of its life from its humble beginnings to how it is now and what it wil be like in the future.

This is the spot of a very special literary pilgrimage so it is apt that you can sleep in the store. Every wall and crevice has a clue as to the soul and allure this store has and the image it has in the whole of Paris, France and indeed the world