Almayer’s Folly: A Story of an Eastern River 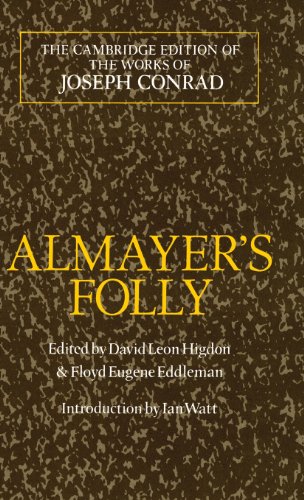 1880s: The Cambridge Edition of the Works of Joseph Conrad

Set in eastern Borneo during the 1880s, Almayer’s Folley recreates the conflicts of imperial Europe with the colonised East Indies through Joseph Conrad’s story of Kaspar Almayer’s personal tragedy: his loss of both his daughter of mixed race to her native lover and his dream of finding enough gold to return to Amsterdam in triumph. The introduction gives the history of the composition over almost five years as Conrad went to the Congo, Australia, the Ukraine, Belgium, Switzerland, and France as a seaman and on holiday.

Travel to Indonesia with Joseph Conrad

Almayer’s Folly charts the progress of  poor Dutch trader Kaspar Almayer in the Borneo jungle. He dreams of finding a hidden gold mine and becoming a very rich man. He understands that the British are to conquer the Pantai River, and so he builds a large, lavish house near here so he can welcome the invaders. However, the conquest never takes place, and the house remains unfinished. This then becomes known as “Almayer’s Folly”.

The novel also explores issues of race and culture  – Almayer is a white European, married to a native Malayan; they have one daughter named Nina. He fails to find wealth and sinks into a depression so he starts to go out on long trips, but eventually he stops doing so and stays home with his hopeless daydreams of becoming rich.