A Quarter Past Dead 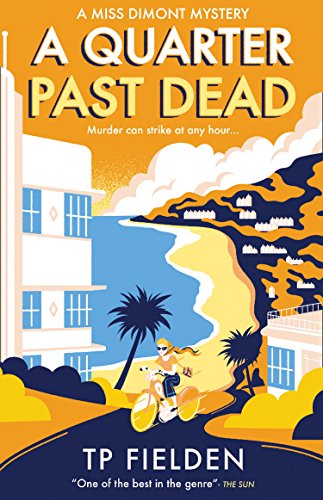 1950s: The Third in the Devon cosy murder mystery series

For holidaymakers it’s a glorious time of breathtaking scenery, picnics on beaches, and flocks of tourists on their summertime holidays.

But for Miss Judy Dimont, this is all a trifle dull. As a reporter for local rag, The Riviera Express, she needs scandal and intrigue – and one morning, as the clock strikes the quarter hour, she gets it. A woman has been shot dead in one of Buntorama’s upmarket holiday huts, the toffee-nosed rival hotelier next door is rubbing his hands with glee, and Judy and her trusty moped Herbert are off like a shot to survey the scene of the crime.

But nobody can tell her who the dead girl is and there’s no clear motive. To have a story to write, Judy must solve the case – and the intrepid Miss Dimont will leave no pebble unturned until the truth is out!

Sadly this village is fictional but it’s very close to  Teignmouth, and Torquay (about halfway in between according to the sketch in the  book) There’s some lovely street names however that would be lovely to wander down such as Tuppenny Row  where the elegant terrace of Regency cottages with brickwork is “pale pink with the passage of time.”

The town is described in glowing terms in The Riviera Express:

“Devon’s prettiest town, Temple Regis took itself very seriously. Its beaches, giving out onto the turquoise and indigo waters which inspired some wily publicist to coin the phrase ‘England’s Riviera’, were white and pristine. Broad lawns encircling the bandstand and flowing down towards the pier were scrupulously shaved, immaculately edged. Out in the estuary, the water was an impossible shade of aquamarine, its colour a magical invention of the gods – and since everyone in Temple agreed their little town was the sunniest spot in England, it really was very beautiful.

It was fat too nice a place to be murdered.”