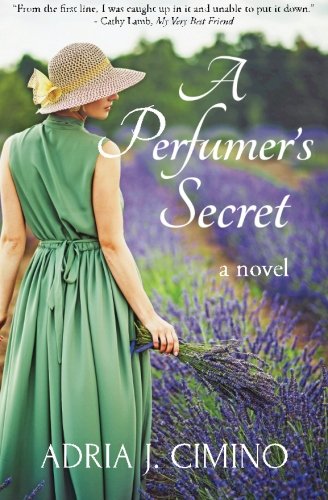 2000s: On the search of a perfume, and a hidden family secret…

Perfumer Zoe Flore is on her way to Grasse, the perfume capital of the world. A treat for any perfumer but for Zoe, this journey is to have special meaning and memory. She is there to collect a formula:which has been left to her in a will, from a family she never knew she had. The scent matches the one worn by her mother, who passed away when Zoe was a teenager. Zoe wants to know more about her mother and her reasons for her leaving Grasse for New York.

This comes at a crucial time for Zoe as she is competing to create a new fragrance for prestigious designer Cherone. This could be the fragrance which wins her the contract.

Before Zoe can discover the truth, the formula is stolen. Philippe Chevrefeuille, the enigmatic competitor who makes her heart race, is the only one who can help her find it. But Zoe is in no mood for romance, or at least that’s what she tries telling herself.

Philippe knows that winning the Cherone fragrance contract would also be good for him. He has both the ambition and ego to make it happen, but that’s until Zoe enters the picture.

The fight is on – but which side will win and how high are the stakes?

The Perfume Brief from New York to Grasse

“Zoe Flore’s first creation was the scent of tears. A hot salty fragrance that she concocted the day her mother died. A perfume built on oak moss, a touch of geranium and the real tears hat tumbled into the mix. If was her fifteenth birthday, and from that moment on, she wore the scent as a suit of armor.”

So for Zoe, the journey she undertakes to Grasse in the search of a contract winning perfume goes a lot deeper than just the top notes. this is a journey to the heart of the French town of fragrance but also to the heart of her family.

She is to inherit a souvenir of olfactory significance abut as she believes her nearly connection to Grasse was the lovely photo of a lavender field that she had inherited. There is much to see in the city of fragrance. The museum of Perfume should be sniffed out first (sorry) and there are a number of museums of individual perfume houses that you should not turn your nose up at either (sorry again).