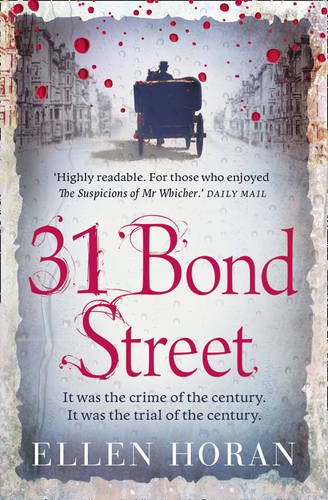 An errand boy discovers Burdell’s body in the bedroom of his posh Bond Street home. Dr. Harvey Burdell, a dentist and unscrupulous businessman has been brutally stabbed and his throat cut.

He was not alone in the house however; the ambitious, Brooklyn-born Emma Cunningham and her two daughters live there too and they and the house staff were all present. They all state they heard nothing and saw nothing out of the ordinary. But immediately Emma becomes a suspect…her relationship with the Dr comes under great scrutiny and gossips start to question if the couple were married and why she was living in the house in the first place.

The trial is nothing less than sensational. Will she hang? Were her teenaged daughters involved? What did the servants know? Who was the last person to see Burdell alive? Lawyers fight for truth, justice and their careers.

The sensational murder of Dr. Harvey Burdell in his lower Manhattan home made front-page news across the United States in 1857. “Who killed Dr. Burdell?” was a question that gripped the nation.

The setting of this novel is a bustling New York just four years before the civil war was about to ravage the country. There is a certain uncomfortable atmosphere in the city for many citizens.

Indeed the area which became CentralPark was once a series of slums and areas of deprivation. Many of the city’s black citizens and recent immigrants lived here and were hounded. Slavery was still alive and well in the south and there were tales of black people in the northern states being tricked and transported to the plantation owners of the south.

The justice system, unfair as it is, becomes central to the story. How the judges come to judge the case, the lawyers and how even the public were told about the case, shaped the entire process. The media hounded everyone involved.

As well as this wide landscape of US politics and justice, you are immersed into a well to do house where ladies were living with a single man as many did at the time, to afford rent and have their homes looked after in their absence. Ways of dressing, acting, travelling round the city in hansom cabs also bring the time and setting to life.