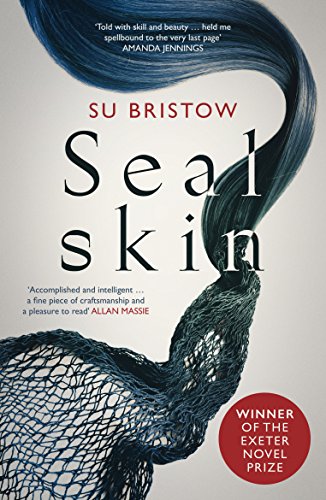 Have you heard the myth about the Selkie?

Sealskin is a novel about a myth and a truth and the line which exists between the two. Donald is a fisherman who spends his life on his boat and on the shore. His day is filled with crab pots and the shimmering waters of the sea. One day he meets the mysterious Mairhi, and before long they marry. He can’t tell anyone how he met her but it’s clear she is ‘of another world.’

Donald  is quite literarily bewitched by his Selkie and what happens next is a result of how bewitched and obsessed he has become. His future will never be the same again. Neither will the life of those around him.

The myth of the Selkie

The myth of the Selkie  is a myth which dates back  to the past – a time in the West of Scotland where fisherman spoke of creatures they saw in the sea. The Selkie is a mythical creature  – seals who come ashore at full moon and fleetingly take the form of young women. This myth becomes real and events take on a turn for the worst. What starts as a fairytale mist, becomes a dark fog in many respects.

Donald is a traditional man, a man who is used to hard labour whether with the crab pots or trying to haul the catch despite his raw cracked hands. This is a man not used to hard work and effort. His discovery and life with Selkie Mhari changes him – and in this community where outsiders are deemed to be suspicious, this woman, this creature is more suspicious than most.

The community changes as Mhari leaves her mark – how others perceive and treat her, more than who she is and what she represents.

If a novel were a song, this would have a haunting melody of longing and regret.  I can imagine an orchestra playing it with the flutes dancing on top of the melody and the drums  rumbling in the distance.  The language is sublime, reading like the fairytale it represents. Words float from the page, the weather and the landscape of this novel creating a mythical and magical backdrop to the whole Selkie myth.

The story goes much deeper than just recreating the Selkie myth – it goes deep inside the minds and imaginations of those who meet her – the undercurrents of a closed community and the secrets that wash up with the tide. Apt watery analogies for what this novel is all about.

The fact that this story is based on a legend makes this intriguing. I love stories based around legends  – they allow me to dream and try to make sense of myths like this. Having holidayed in Scotland a lot, and in around the Hebrides, this was like going back to the mist covered islands and seeing the legend unfold for myself.

There is a very dark undercurrent to this novel though that I was a bit disappointed by, saddened even  but  overall the novel was a song of magical realism that sang to me. I can still hear the whispers of that music now.