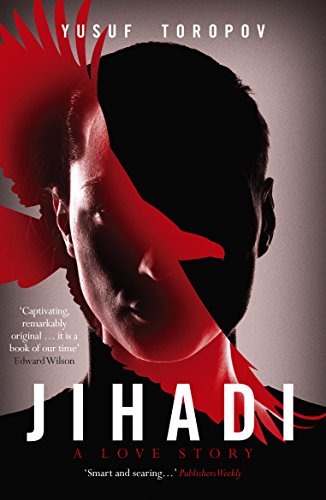 2000s: Think you know what a terrorist is, what they look like? How they act?

Terrorism is a subject that  we hear almost everyday in the news. It’s something we all think we have an opinion on. But this book could well just open your eyes and allow you to look more closely at what you think you see.

There is a man in a prison being held on terrorism charges in an overseas prison somewhere. He is a former intelligence agent who has written a memoir and now this memoir is in the hands of a psychologist. She goes through it and analyses his words, his thoughts and his mind, but does she have an agenda all of her own? The man in jail, the suspected terrorist is being held without charge, but the psychologist delves into his past and ultimately the truth of what happened one night on that overseas assignment will come out..

As we delve into that world, the world we think we have an opinion on, be prepared to be challenged.

A Jihad is a “God-conscious intention and effort in the face of an obstacle”. or is “One man’s terrorist [is] another man’s freedom fighter”?

The mind of an American operative in a secret prison being held and accused on terrorism charges is  a dark and foreboding place to be. As a secret agent, he was trained to kill on government orders. He seems to have converted to Islam whilst there, got close to a woman named Fatima, a devout Muslim and follower of the Islamic faith.

This is the story of the uprising which took place there, of the carnage and the dead children, from both sides of the fence, both sides of the Intelligence services, as well as the radicals and the fighters who try to infiltrate both. Both sides believe they are in the right – that the other side has to die, but do they all believe the same thing to the same degree? Leaders muster support for ‘ the cause’ and the followers follow.

Everyone wants to feel as if they belong, as if the cause is their protection, their reason for doing what they do. Human nature or terrorism? The end or the means? There is a fine line in that sand.

As you read, the person writing the notes in the memoir listens to music and even interprets the words as saying things, having meaning of a certain cause. Can anything be interpreted and moulded to fit? Even the lyrics of a Beatle album it would seem. Each note writer has something to say, an opinion to give, and this is the world we are immersed in, where not even the paper ‘the truth’ is written on is worth anything if you don’t believe.

Wow. I really don’t know what to say about this novel as it is a very complex and fascinating read, a story of our time you might say given the subject matter. I admit was a bit wary of the title and the start of the novel is hard to get into – but I wanted to read this, I wanted to know more and I’m so pleased I did. I feel I’ve achieved something, experienced a very unique literary  experience and delved into the minds of people in a world I knew nothing about.

The world of terrorism is a dark and terrifying place but this novel with the clever use of memoirs and the arguments from both sides gave another unique angle – it’s not about the religious side of things really but rather the human side of it, if that doesn’t sound too strange. Can people really be brainwashed for the greater good if there is nothing it for them?

I can really say that I’ve never read a book like this before. It’s not as easy read but then I don’t think it should be. This is not an easy subject but is treated with such care and attention that I was drawn in. I’ve never jotted so many questions and comments down when reading a book before. There are still questions I have, things I am thinking about. Now that is a book worth reading. A book to interpret for yourself.