We Were the Lucky Ones 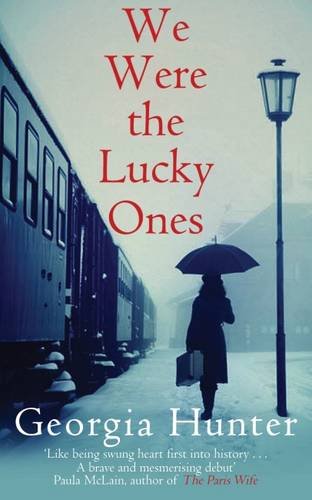 1939: War comes to Poland..and the Jews are forced to flee. This is the story of the remarkable Kurc family.

The Kurc family shouldn’t have survived the Holocaust. In the spring of 1939 three generations are living relatively normal lives in Poland, despite the hardships Jews face. When war breaks out and the family is cast to the wind, the five Kurc siblings do everything they can to find their way through a devastated continent to freedom.

Addy, a musician, charms his way into possession of a Brazilian visa and into the first class piano lounge on a ship full of refugees bound for Rio; Jakob marries the love of his life in an abandoned house to a soundtrack of air sirens; Mila hides her daughter in a Catholic convent outside of Warsaw, only to return weeks later to find the convent in ruins.

Genek endures a brutal winter in a Siberian gulag before embarking with his wife and newborn son on a year-long exodus through Persia to fight for the Allies; and Halina attempts to flee over the Austrian Alps on foot – while pregnant.

All this, across continents and often in ignorance as to the fate of the rest of their family, while the wheels of war turn

The landscape of fear

From the quiet life of Radom, Poland, to the horrors of the Siberian gulag, this is a story of one family’s courageous attempts at escape from the war so they might one day be together and return to their beloved country. There are mentions of many European cities – Paris,  Warsaw and cities in Italy and Brazil, but it’s in Poland and the Ukraine where the real story unfolds

The novel is largely set in Poland and Siberia but it’s the landscape of fear which dominates. One family member is in Paris and flees to Brazil amongst other countries as many people across Poland and Europe are realising just how loud and near the rumbles of war are. Others become scattered all over – suddenly boundaries mean nothing apart from the ones the invading Germans or Soviets dictate. Their country, their homeland is being destroyed and they are far from it, and from each other. It’s absolutely heartbreaking.

The story is all the more poignant since it is that of the author’s family. The strands of the story are those passed down to her over the generations. Her grandfather was the inspiration for Addy in the story. Much of her grandfather’s experiences she never got to know when young as this was a part of his life he never waned to revisit. The horrors of the camps, the war, the fear and the pain of being separated from your homeland and your family – unimaginable. This novel is a homage to him, the Kurc family and the 90% of Polish Jews who were killed. Only 300 out of the 30, 000 Jews from Radom survived.

The Lwów Ghetto was one of the largest Jewish ghettos established by Nazi Germany after the joint Nazi-Soviet invasion of Poland.

The story of destruction takes the family to the Siberian camps in Altynay  and the city of Lvov. There is no curfew here yet but when Radom is bombed, then fear grows and many Jews fleet to Palestine and elsewhere. The mass exodus is underway and the world is alit with fear

I have no words to describe this book really which is not so good when writing a review, but it’s the fact that this is one of the most moving and most harrowing books I have ever read. It feels so personal, IS so personal since the author has paid homage to the experiences and memories of her own family, that I feel humbled to have read it. I can’t begin to imagine the horror they must have felt although the writing evokes the feelings, the unspoken words and the fear etched on them all.

I had to sit and think after reading this. I hope the author is proud of this book and proud of the memory it reawakens of her family. How one family escaped , how they managed to survive the ways they did, is testament to their strength. When your entire identity is being erased with pogroms, renamed street signs, new terms and conditions as to what you can and can’t do, when your home is destroyed and even your faith is being taken away, where else do you go?

Each of the family members has their own story to tell – how their village is changing but its the gradual changes that are the problem as at first, nothing is too bad, people learn to adapt, but then things spiral out of control. Each one of them has their own story to tell and their own journey to face. Fear guides them all and when all stories are interwoven, then this is one epic read on so many levels.

This is an important book to read on so many levels and it should be included on so many reading lists. Every chapter in the family’s journey began with the date and location, and named the character in question as well as a bit about the historical background which really gave the novel a fascinating arc.

The story and research are very impressive but what choked me up the most? Seeing the picture of the real life Addy at the end of the book. Highly recommended.

Booktrail Boarding Pass: We Were the Lucky Ones