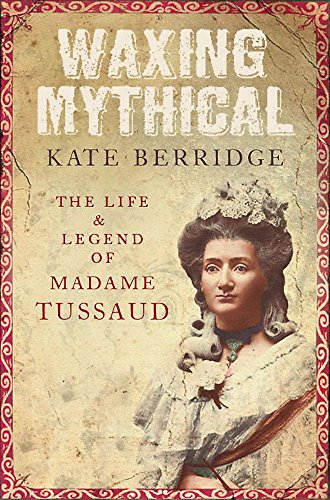 Marie Tussaud led a remarkable life and with grit and audacity she overcame reversals of fortune to build an extraordinary spectacle.

Of lowly birth, Marie became apprentice to a charismatic Paris showman who taught her wax modelling. They lived among a colourful cast of ‘Italian singers, pastry cooks, restaurant keepers, marionettes, acrobats, giants, dwarves, ferocious beasts’. In her memoir she also claimed friendship with royals and revolutionaries including Marie Antoinette and Voltaire. But, as a born entrepreneur, did Marie’s flair for publicity extend to moulding her own story?

After the Revolution, she came to England and took her show on the road. She pursued the punishing lifestyle of the travelling show for years and secured a lasting reputation in the Dickensian world of 19th century popular entertainment.

Strasbourg to Bern, Paris to London

Marie Tussaud was born Marie Grosholtz on December 1, 1761in Strasbourg, France and died April 16, 1850 in London, England. She is the founder of the Madame Tussaud’s waxwork museum in London which has branches across the world.

Born in a small village in Strasbourg, she spent some time in Bern working before moving to Paris. It was here that she met Philippe Curtius and learned the art of wax modelling. He had two museums of waxwork models which Marie Tussaud inherited once he had died in 1794.

Life got really interesting in around 1780 when she was employed as an art tutor at Versailles for Louis XVI’s sister , Madame Élisabeth. During the Reign of Terror,she had the not so very enviable job of creating death masks from freshly severed heads which had just been chopped off by the gullotine.

She married an engineer by the name of François Tussaud,  but the marriage was short lived. In 1802 she took her two sons and her collection of wax models to England and toured the British Isles for 33 years before finally establishing a permanent home in Baker Street, London.

She lived in London for around 8 years until she died. The Baker Street museum moved to Marylebone Road in 1884.

Many of the original models made by Marie Tussaud of people of her time such as Voltaire, Benjamin Franklin, Horatio Nelson, and Sir Walter Scott, have survived to this day.