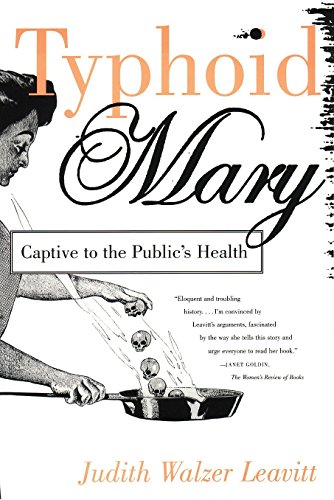 She was an Irish immigrant cook. Between 1900 and 1907, she infected twenty-two New Yorkers with typhoid fever through her puddings and cakes; one of them died. Tracked down through epidemiological detective work, she was finally apprehended as she hid behind a barricade of trashcans. To protect the public’s health, authorities isolated her on Manhattan’s North Brother Island, where she died some thirty years later.This book tells the remarkable story of Mary Mallon–the real Typhoid Mary.

Mary Mallon was also became known as Typhoid Mary, was an Irish-American cook.

From 1900 to 1907, she worked as a cook in the New York City area for seven families. First of all she took a job in Mamaroneck, New York, where, within two weeks of her employment, residents developed typhoid fever. In 1901, she moved to Manhattan, where the same thing happened. When she moved from that job and went to work for a lawyer; she left after seven of the eight people in that household became ill.

In 1906, she took a position in Oyster Bay, Long Island, and within two weeks 10 of the 11 family members were hospitalized with typhoid. As her role as cook for the family of a wealthy New York banker, who had a summer house in Oyster Bay and six of the 11 people in the house were brought down by typhoid fever.

She was taken to an asylum in North Brother Island  and quarantined so that she was not allowed to communicate to the outside world. She spent a considerable time here and was tested and examined for a whole range of illnesses and symptoms. Most of the time she was put in isolation.

She was the first person in the United States identified as an asymptomatic carrier of the pathogen associated with typhoid fever. She was presumed to have infected 51 people, three of whom died, over the course of her career as a cook.