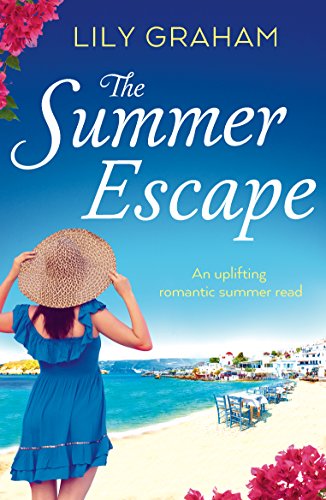 2000s: Grab life with both hands in sunny beautiful Crete

Rita has lost the love of her life and since then her life has been on hold. It doesn’t help that her boss is even more of a pain than she thought. So, grabbing her passport she makes a run for it and decides to just head off to Crete and make of it what she can.

Once on the sunny island, she begins working for eccentric novelist Caroline and meets with the handsome vineyard owner Tom. He’s mysterious, handsome and rather quite nice and Ria starts to wonder if it’s not just the beautiful Greek island that she’s falling for.

But as she gets to know him, she finds out things about him which are hard to believe. Ria has some secrets of her own. Can she open up to Tom and learn to live again?

“What have I done? Why am I on a plane? To Crete? There has to be some mistake”

If you are going to escape anywhere and to spend time anywhere, then Crete is a the ideal place to go.

From the moment they arrive at Chania, the sights and sounds of the island come into their own:

“Chania old town? For just a moment, I cam smell the faint aroma of wild lavender, taste the sweet tang of honey on my tongue add feel the fine texture of flour between my fingers”

Chania is magical and very historic:

“the strange, beautiful and ancient city; coloured by the people who made it their home through the centuries from the ancient Minoans to the Venetians and Ottomans till finally freedom hard won”

Most of the time, Ria spends her time working for Caroline a novelist and so spends a lot of her time in the library and in the office, but it’s the descriptions of the Elysium, the luscious vineyard that intrigues:

It was a thousand year old vineyard destroyed by fire and family fun in the mountainous regions of Western Chania. This is where Tom has returned to in order to resurrect the family legacy. The mystery of the fire has never been solved but there are suspects… The wine, pinotage, is one that he is staking the future on and it’s hoped that the Cretans are going to take it to their hearts.

Louise: @thebooktrailer
A real summer escape – from the very moment you arrive in Crete, there is a sense of Crete and the excitement that you will want to step on a plane yourself and quick.

A really nice romantic read but there is a good little mystery in there too. How and why did the fire happen and will Tom manage to get the place on its feet again.  The very idea that someone would grab their passport and  run off to distant climes is very admirable – some would say reckless but I think a lot of people would try and do this if they had the guts. I’m pleased that she did this as it was  a really nice way to escape to the island.

I really liked meeting Carline too as I think this is the kind of person I’d like to work for as well. She’s met some fascinating people in her time and the stories she tells!