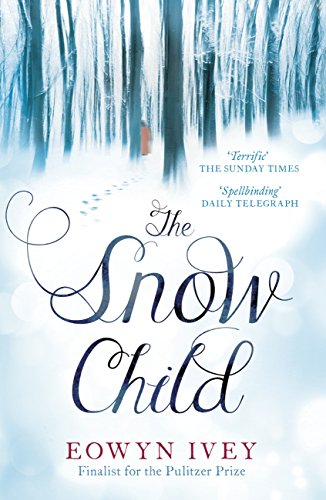 1920: Such a captivating story – about a snow child made by a lonely couple living in Alaska who made a snow child who one day comes to life .

Mabel and Jack can’t have children of their own and so move to Alaska to start a new life. They struggle in the harsh environment and find it hard to farm in the snowy hard landscape. One day however Mabel decides she wants to build a snow child – which she dressed in clothes and a hat. Jack gives it a face and a smile.

In the morning however, the snow child is gone but there is  a trail of footprints disappearing in to the woods.

This is the retelling of a russian folk tale or fairy tale – Little Daughter of the snow  and Snergurochka – but this is no fairytale as it evokes he land as a harsh environment and the snow as not blanketing but smothering those who live there. The action is slow and chilling but the snow and the woods take on identities of their own – on and in fact an integral part of the snow child story and her identity.

Snow brings danger and cold but there is also a sense of childlike innocence and a new beginning that it also represents.

The atmosphere and the setting of this novel are just magical. It’s inspired by the Russian fairy stories  such as Snegurochka – from the book Russian Lacquer, Legends and Fairy Tales by Lucy Maxym and Little Daughter of the snow from Arthur Ransome’s Old Peter’s Russian Tales. This book is one magical journey into the wild,snowy Alaskan landscape. A couple living in a plain wood cabin, lonely and isolated in more ways than one. A sad past filled with regrets and longing. The snow outside muffling the secrets and aspirations of everyone in the small Alaskan community. Where footprints in the snow suggest a new visitor or a stranger for no one comes to these parts.

When the footprints are seen in the snow, when the snow child they have built disappears into the woods, the chills shiver down your spine as how has she come alive? Why is she so shy and what is she keen to disappear into the woods for? The story is only just beginning yet it’s not all magical..

The snow, the deafening silence, the crunch of the footprints and the very thought  that somewhere out there there is a snow child running and hiding in the woods. The old couple want to take her into their home, their simple log cabin with more love inside that furniture or food. This is a harsh winter, difficult times and where loneliness and sorrow seem to be falling heavily along with the snow flakes.