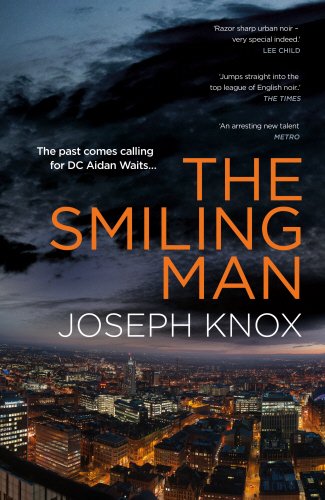 2000s: What is the dead man hiding behind his smile?

Disconnected from his history and careless of his future, Detective Aidan Waits has resigned himself to the night shift. An endless cycle of meaningless emergency calls and lonely dead ends. Until he and his partner, Detective Inspector Peter ‘Sutty’ Sutcliffe, are summoned to The Palace, a vast disused hotel in the centre of a restless, simmering city. There they find the body of a man. He is dead. And he is smiling.

The tags have been removed from the man’s clothes. His teeth filed down and replaced. Even his fingertips are not his own. Only a patch sewn into the inside of his trousers gives any indication as to who he was, and to the desperate last act of his life…

But even as Waits puts together the pieces of this stranger’s life, someone is sifting through the shards of his own.

When the mysterious fires, anonymous phone calls and outright threats escalate, he realises that a ghost from his own past haunts his every move.
And to discover the smiling man’s identity, he must finally confront his own.

“Formerly the site of the city docks, a port on a busy stretch of the Manchester shipping canal, they’d fallen into ruin when the industry went abroad. Int he 80s the boomers had swept in and redeveloped everything into half a billon pounds’ worth of shiny, ultra-modern high- and low-rises, glittering out onto the water. the buildings were uniformly steel and reflective, jutting out from the edge. The architecture and the economic reality for the people living it it.made for an unforgettable fit with a lot of the city’s down at heel housing.”

“The Palace is an enormous Victorian redbrick on the corner of Oxford Road and Whitworth , It sits opposite the Grand Central and the Thirsty Scholar with the Black Dog Ball Room  around the corner. I could see the clock tower, two hundred feet above us, commanding the skyline”
“Where Oxford Road intersects wit Great Bridgewater, I saw lights coming from The Temple, In a past life, the Temple, had been a public toilet. It had also been a notorious cottaging spot in Victorian times, taking the city’s history back far before Canal Street. Now it was a small subterranean bar.”

“I entered through the Paifang, a 20 foot archway above Faulkner street, adorned with pixies, dragons and gold-leaf fishes. It felt like stepping out of sync with the world and passing through to another dimension and as I arrived it was coming vividly to life.”
It was an easy place to get a fix and the walking dead seemed to shuffled by on every street, dissolving in and out of reality”

If you thought Sirens was a blues and twos kind of ride, fast paced, noisy and chaotic, then this is Sirens with bells on!

Gritty, down right brutal and not for the faint hearted. Manchester has a dark dark heart it would seem, well at least in this novel but there’s some clever commentary woven in about the city in real life, how its history has shaped it, the importance of China town etc…. very nicely done.

Characters are razor sharp and that smiling man?Oh dear, a dead man smiling is not a good sign That sent shivers up my spine right there.

Knox on the door of your local bookseller for this one. 😉