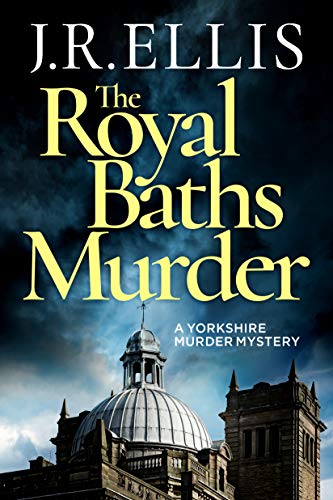 2000s: A writer from Harrogate’s crime festival is found murdered….

A famous writer is found murdered at the Victorian baths in the Yorkshire town of Harrogate. In a crime worthy of one of his novels, Damian Penrose, who was appearing at the town’s crime writing festival, has been ruthlessly strangled. But with no trace of the murderer and no apparent means of escape, how did the killer simply vanish from the scene of the crime?

There’s only one mind capable of unlocking this mystery: DCI Jim Oldroyd. But as he and his team quickly discover, while Penrose was popular with the reading public, he had made plenty of enemies. Feuds over money, accusations of plagiarism, a string of affairs…His route to the top left a trail of embittered rivals—and suspects. But which of them was willing to commit murder?

When Penrose’s shocking death proves to be just the first of many, it becomes clear to Oldroyd that he is dealing with a calculating criminal hell-bent on revenge. He must find and bring them to justice. Before the truth becomes more chilling than fiction…

If you love books, cosy murder mysteries and the crime festival at Harrogate, then this book merges all that and more.

“Harrogate is the queerest place with the strangest people in it, leading the oddest lives of dancing, newspaper reading and dining.”

“The Harrogate Turkish Baths of 1897 survive virtually intact, with many of the original fittings still in place. They have recently been refurbished. The Baths have a Moorish design with Islamic arches and screens. The walls are of bright multi-coloured glazed brick. The arabesque-painted ceilings, Italian mosaic floors and polished hardwoods produce a period feel of luxurious colour and elegance.”

This is the setting of the very real and very famous crime writing  festival which takes place at the White Swan hotel every year in July. The hotel is famous as it was the hotel where Agatha Christie famously escaped to when she went missing for several days when escaping her marriage and taking time out to think about her life. She told no -one where she was and the room where she stayed has a plaque on the wall marking the event.