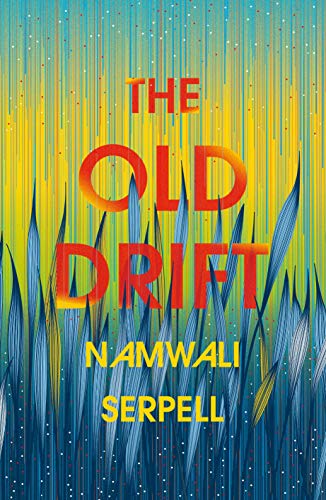 2000s: A Zambian debut novel that follows three generations of three families, telling the story of a nation, and of the grand sweep of time.

On the banks of the Zambezi River, a few miles from the majestic Victoria Falls, there was once a colonial settlement called The Old Drift. Here begins the epic story of a small African nation, told by a mysterious swarm-like chorus that calls itself man’s greatest nemesis. The tale? A playful panorama of history, fairytale, romance and science fiction. The moral? To err is human.

In 1904, in a smoky room at the hotel across the river, an Old Drifter named Percy M. Clark, foggy with fever, makes a mistake that entangles the fates of an Italian hotelier and an African busboy. This sets off a cycle of unwitting retribution between three Zambian families (black, white, brown) as they collide and converge over the course of the century, into the present and beyond. As the generations pass, their lives – their triumphs, errors, losses and hopes – form a symphony about what it means to be human.

The story begins in 1904 and takes the reader along like a river through time. It flows into the present day and beyond, into the future. On its way it picks up bits of various themes such as politics, the history of white British pioneers in Rhodesia and the ‘natives’, racism, empire and so much more. This is the story of a country and its people. Many locations are highlighted and spoken about. From Victoria Falls to the settlements along the Zambezi river, these are tales of a country going through some very important times in its history.

The settlement of Old Drift does appear on the map – two posts across the river Zambezi. One in Zambia and the other Zimbabwe. There’s places with interesting names too such as the part of the river called Devil’s Cataract.

The Old Drift is an epic novel. Both in size and scope. It’s not an easy read and is quite complicated in places but stick with it, as it’s a very unique reading experience. A tale of three families and three threads running through it which interweave into an impressive tapestry.

It’s almost experimental and it’s unlike anything I’ve read before. Sometimes it has visions of grandeur it can’t live up to, yet I was fascinated to see how it all played out. It’s a vision of Zambia, of Africa, of the space race, political shifts, and most of all….people and their lives.

Read TheBookTrail’s Bookreview of The Old Drift by Namwali Serpell