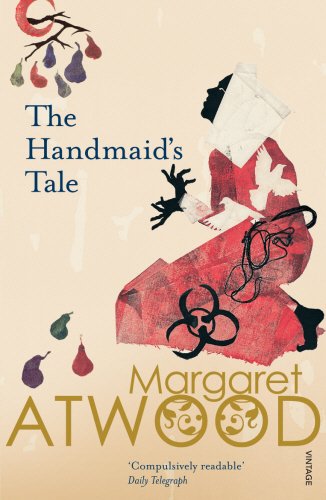 Dystopian near future: Women’s rights are no more, the USA is no more, The Repulbic of Gilead is all that there is.

In the Republic of Gilead – a new government rules the former United States amidst an ongoing civil war. Society  has been reorganized along a new, militarized, hierarchical regime of Bible-inspired social and religious fanaticism – women  are subjugated and due to widespread infertility are captured and stripped of their former identity and human rights. They are called Handmaids, according to Biblical precedent — assigned to the homes of the ruling elite, where they must submit to ritualized sex with their male masters in order to become pregnant and bear children for those men and their wives.

One woman now called Offred as she belongs to a man named Fred, remembers her former life in flashbacks. She realises how quickly this new world is taking over and how fast the world is descending into hell. There is no way out – the fantasists are all around and everyone else seems to be accepting these new norms. There are eyes everywhere and suddenly the old adage power corrupts and power corrupts absolutely has never been more true. 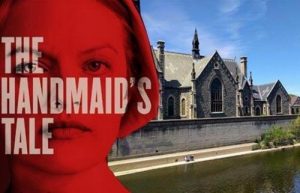 Gilead is fictional of course and said to be somewhere in New England but the recent TV adaptation is firmly set in Canada since this is where the adaptation was filmed and in homage to the author who is from this very city.

You won’t have seen these very ordinary buildings this way before and after this TV show, probably never again! Who would have thought that a nice walk beside the water would hold visions of such dystopian events. The Fairmont Hotel in downtown Toronto also becomes a building with a difference after watching later episodes. Imagine staying here and reading the book though!

Some scenes such as the Commander’s House and the river scenes (where the Handmaids like to take the long way home) are filmed in Hamilton and Cambridge, Ontario. Many scenes in the handmaid’s former life are filmed in downtown Toronto so there are many buildings in the background such as the City Hall where men with guns stand guard.

An interesting place to visit is the church which the handmaid’s pass in episode 2 and it has been partly demolished by the new rulers  – This was the James Street Baptist Church in Hamilton which actually was in the process of being demolished but with the magic of TV, it’s been  largely built up and left to smoulder..