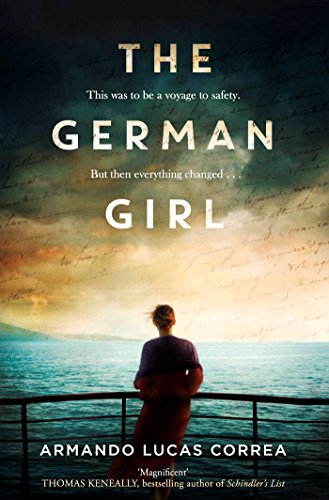 1939, 2014: The true story of the ship of Jews fleeing the war, at first their saviour, and secondly their prison.

The streets of Berlin are draped in swastikas and Hannah Rosenthal is no longer welcome in the places she once considered home.

However, the St Louis, a transatlantic liner promises Jews safe passage to Cuba. The Rosenthals sell everything to fund visas and tickets. At first the liner feels like luxury, but as they travel the circumstances of war change, and it soon becomes their prison.

Seven decades later in New York, on her twelfth birthday Anna Rosen receives a package from Hannah, the great-aunt she never met but who raised her deceased father. Anna and her mother immediately travel to Cuba to meet this elderly relative, and for the first time Hannah tells them the untold story of her voyage on the St Louis.

On Saturday , May 13, 1939, the transatlantic liner St Louis set sail from the port of Hamburg bound for Havana, Cuba. The ship was carrying 900 passengers, the vast majority of them German-Jewish refugees, and 231 crew. More people joined the ship in Cherbourg two days later.

The ship and refugees had landing permits and Cuba was set to be a transit point as they were then expected to head to the USA where they already had visas. However a series of errors and changes by the Cuban authorities means that the visas were revoked, and others made invalid. They had been made to purchase return tickets and so had no money to do anything about it. It was forced to dock in Havana Bay and then was turned away from the harbour. Despite long negotiations, the Cuba president ordered the ship to leave Cuban waters. It then tried to sail to Miami where the same thing happened and in Canada too.

The St Louis was forced to sail back to Hamburg from where the authorities then managed to get the Jews sent to various countries including the UK, France and Belgium. This was to prove tragic in many ways since not long after Germany declared war and so the Jews were now in a very dangerous situation.Many suffered the tragic fate of other Jews living there who had never tried to leave.

The St Louis was destroyed during Allied air raids on Germany. Apologies have been made by American and Canadian governments. All papers and evidence relating to the Cuban affair have seemingly disappeared from the Cuban National Archives.

This is a remarkably tragic story and one I hadn’t heard about before. A difficult book to read for what ultimately happened but this fictional account really brings out the courage of those on the ship and the courage of the families waiting to see what would happen to them.

There were so many points where I almost yelled at the decision of governments to turn these people away, of Cuba’s efforts to change the rules and their minds. No one seemed to understand the gravity of the situation and the escalating war. Or maybe they did, and the story is even more tragic for being so cruel.

It’s a remarkable heartfelt story and I was moved at every turn. The story is told by Anna and Hannah and as their stories intertwine, the full picture emerges of how one event can have so many consequences years later. There is so much I can say about this book but do you know what? It’s one to read for yourself to fully absorb it all as a review here just can’t do it justice. Can I even understand this really happened? Unbelievable. Human cruelty and ignorance knows no bounds.