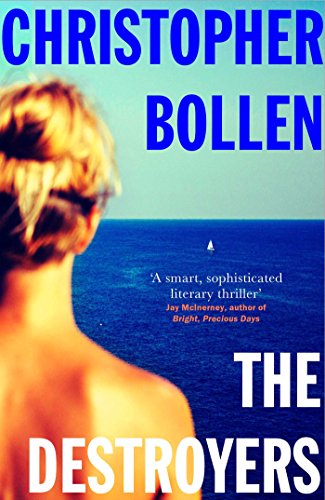 2000s: Can a childhood game ever come back to haunt you?

“When Charlie and I were young, we played a game called Destroyers . . . We were sharpening our instincts, jettisoning attachments. We were honing strategies for survival …”

Ian Bledsoe is on the run, broke and humiliated. His father has just died and he’s been cut from his will. But what his family don’t know yet, is that he’s taken some money he thought he was entitled to and soon his family and siblings are going to want it back

Ian’s early life starts here at the HQ of Kitterin where he works as an apprentice in his father’s business before fleeing to Patmos. This city is awash of colour and shadows. A city where “green is the dominion colour here”

“The city is surrounded on all sides by stalled sea and jungle. And the real green, of course if the reason for the nations’s existence: the swamp green money , collected and counted and flowing all hours through the world’s most famous shortcut”

A world also of drugs and gangs – a country which is stable and prospering as long as it leaves the gangs alone. This is s city of contrasts – “Rainy streets with sad Spanish haciendas with gated gardens”. Then there’s El Chorillo which is the neighbourhood you don’t go anywhere near. It was a series of “Bloody news stories protected by  a pay wall”

There is a small Greek island Cephalonia with a stunning sea port city of Skala – a port city where people wait for the next ferry to a neighbouring unexplored place. Where people sit by the sea and drink ouzo or something equally as greek. And where apparently “the pooulation of Skala spikes inthe night like a murder rate. It’s  “whirlpool of motion that becomes more frenetic as the ferry approaches. It’s an island for hedonism, tourists, more bodies than hotel beds and a cacophony of noise. But then tragedy rips the island apart…

The island which shimmers in the sea like a jewel:

The Greek island of Patmos was a wheeze of colour: bleach blond dust, scrub brush of wiry green , the wet-metal shine of water , and low rock walls blooming sinus pinks. “The beaches here were perfect and the sea like glass”

The island at the heart of the story and where Chris has escaped to in more ways than one. He has a boating business and spends his time in paradise – or at least that’s the tale he would have his friends believe. Ian believes this place is going to change him – and that this new life style is going to be the one he adopts. He’s right, but not in the way he thinks. Paradise has some very dark clouds that you can’t see for the brilliance of the sun hitting off the golden sands and shimmering blue waters.

Cave of the Apocalypse

Its name and meaning and role in the novel gives a sense of foreboding. This is a real tourist attraction and is “The darkest place…on all of Earth. Think what nightmares came from here, the plagues and demons and reels of destruction, everything we still think of as the end of the world. You can almost hear the beat of the horseman’s gallop” This is a place of apocalyptic proportions and it hides a dark past.

These two villages on the island are where most of the story takes place and the intrigue unfolds. The bright sun blinds characters to their flaws and those of others. Working on the boats, hiding from the world, this is where Ian feels safe – at first. This is paradise. An easy life with no problems and no one chasing him. Ignoring emails and the outside world, he meets Charlie and becomes part of this world that is carefree with the slightest tinges of danger. For the game, their childhood games of the Destroyers might never have been forgotten and in these new surroundings, he can never really be sure of who and where he is. Who is Charlie now?

The innocence, beauty and purity of these villages the picture postcard image of boats clanking in the harbour, the sun melting the icecreams and burning holiday memories into people’s minds contrasts directly with the shady business dealings and lifestyle Charlie now boasts. But this now is Charlie’s workplace but also his playground…

A literary thriller  with a sting in its sun-drenched, glistening tale. This novel is like a scorpion sitting on a Greek island in the middle of the Aegean sea when just when you’ve blinked or turned your eye away for a second, it strikes you, shoving you into the water. You struggle to breathe and before you know it, you’re so fully immersed, you have to swim to the end.

That’s the best way I can describe this book. This was a thriller where really nothing was at it seemed. The Greek setting shone – from the shady coves, the life on the ocean wave, the inclusion of the Cave of the Apocalypse for example….it was like a Greek tragedy waiting to play out on a sun-drenched but rocky and dangerous stage. Shakespearean in scope, this grabbed me with its themes of tragedy and backstabbing. I can’t say I liked any of the characters but they were complicated and yet vague at the same time. The location, the language barrier, the hedonistic promise of such a place…a bit like the Beach in places, or Lord of the Flies….there are multilayers to this story as well as the villages and villagers who live there.

Charlie and Ian were interesting characters and I was intrigued to find out just how that game of Destroyers would come into play – I was hooked with the premise and the way events played out. Charlie and Ian tangled in a web of lies…oh I can’t say much as you really have to explore this for yourself. But the allure and pull of that paradise…. I was there in the sunshine and eating the array of sumptuous Greek food that I barely took any notice of the impending danger. So when it came – that boat was well and truly rocked.

The start of the novel was shocking as was the brilliant ending. Whilst it was a little overlong and there were times the main thread of the story seemed to get caught in the rocks close to that Greek sea, there is a lot to pick up along the way but the journey is worth it. The destination is something else. Patmos is the place to be this summer! On the summer TBR pile for me!