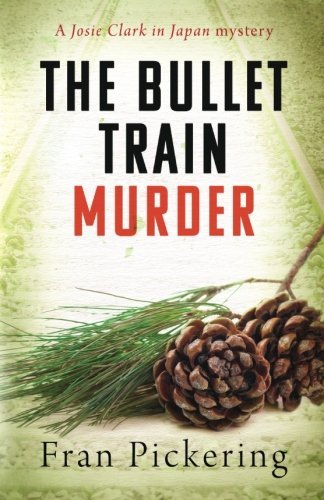 2000s: Josie Clark is excited to have a transfer to work in Osaka. But murder soon follows…

Josie Clark loves Japan and has lived in Sapporo but now is living the good life with her boyfriend Dave. Finally they are not only in the samecountry but the same city, which helps. So a work commitment of six months that will take Josie from Tokyo to Osaka could not have happened at a worse time relationship wise. Still, with Dave’s blessing, she heads off there and takes the famous bullet train which will be her regular mode of transport

She’s only been to work a few days when there’s an incident on one of the bullet trains. Not the one she is on, but the next day at work, she realises the victim is someone from work. She might not have known him that well but it’s suspected that she was one of the last people to speak with him albeit briefly. But surely they can’t suspect Josie of any wrong doing?

There is something strange going on in her new company however and Josie recognises that familiar niggle of having to investigate for herself. She speaks the language, is new to the area but knows some of the staff who have become her new friends. But is she closer to the truth than she realises?

Japan and the bullet trains

Welcome back to Japan. The third adventure for Josie in involving the very famous and efficient bullet trains. There are various forms of bullet trains it would seem -Nozomi, Hikari or Kodama. Depending on if you need a fast train or a not so fast train, only the Nozomi apparently deserves the name of a bullet train.

In a country where public shame is paramount, it’s a mystery why anyone would attempt to kill someone in a disabled toilet on a train. These trains are revered and used every day by millions of people so the murder must have taken place in plain sight. Just as it was approaching a station.

Josie travels to and back from Osaka, her new place of work from Tokyo and the flat in  Meguro, where she now lives with Dave.  Osaka is apparently Mamchester to Tokyo’sLondon but the backwater is starting to be a lot more risky and turbulent than the big city itself!

Tokyo – the other end of the line and the city Josie still loves to explore,taking in the sights of Yoyogi Park and the noodle bars of downtown. There’s also mention of a cool place known as Book alley – Kappa passage or Kinokuniya which sounds interesting. If only Josie had time to explore instead of solving crime!

Welcome back Josie! Ah I do like these books and you can tell Fran loves Japan and really enjoys putting Tokyo and now Osaka on the map. I enjoy these stories for the little details such as the Japanese way of eating noodles, the three types of bullet train, why there is apparently no mile high club (and the train equivalent) There’s just enough characters to get to know them all but not so few as to immediately spot the killer.

Josie is a good expat – she speaks the language and immerses herself in the culture and society of the city she’s in. She does seem to find murder wherever she goes but she’s so likeable that I always find I’m rooting for her. She’s the least likely suspect for an investigator but she is noisy so that’s all you need really. Likeable and noisy. Two good traits to blend in.

The bullet trains are something that have popped up in earlier novels but I was really taken with them and the mystery of the murder. There’s lots of little Japanese touches like how she is introduced to her friend;’s noodle bar, how they sit on trains, why any parent would name a child ‘ lucky ears’ You come away with quite a lot of little cultural touches that really make this novel stands out.

Oh and I’ve discovered a good phrase in the book that’s perfect for today’s review – Hana no Kinyoubi- or ‘ thank goodness it’s Friday as this book is perfect for a cosy Friday read! Ps