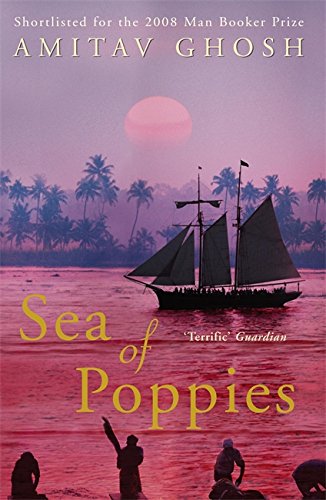 1800s:  Set on the eve of the Opium Wars, an old slave ship, The Ibis, is on its way across the Indian Ocean.

Set on the eve of the Opium Wars, an old slave ship, The Ibis, is on its way across the Indian Ocean.

On board are a truly diverse cast of Indians and Westerners, and before long circumstance has made them jahaj-bhais or ship-brothers. An unlikely dynasty is born, which will span continents, races and generations.

From the lush poppy fields of the Ganges, the rolling high seas, and the exotic backstreets of China, the colonial history of China comes to life.

An unusual bunch  of characters who all find themselves aboard a ship, in the middle of the Indian Ocean is the setting for a a very interesting adventure. SEtting off from the Hoogly River in Calcutta the ship is bound for Mauritius in the 1830s

The ship is Ibis,a  black birder which means that it was a slavery ship but now carries something else rather more profitable than slaves – opium and other drugs. The journey across the ocean makes the people on board react and create a unique sense of community:

“..from now on there are no differences between us, we are jahaz-bhai and jahaz-bahen to each other; all of us children of the ship.”

British traders wanted to trade with China and used the opium they got from the east India Company in exchange for tea. The opium for tea deal was vital to UK trade so when the Chinese banned it, and held Britons hostage – 1839, throwing so much of the drug into the Pear River, war broke out.

The Brits then discovered that the Indian Himlayan mountain range resembled China’s best tea-growing regions. And so the importance of the area grew. But they needed someone to get the project running and make it successful – a plant expert and a spy. That man was Robert Fortune, the protagonist of this book

The island of Mauritius is the port of call for the Ibis and there is much excitement at arriving here. The islands have an almost mythical quality  but it;s also one of the British Empire’s network of island prisons.