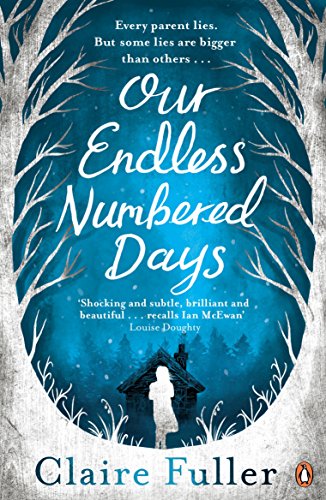 In 1976,  8 year Peggy is taken on holiday by her father who tells her that they are going to find the place he calls ‘die Hütte’. He is also one of these survivalists who believes that the world is going to end and so by going to the cottage, they will have a safe haven. She dutifully goes with her father into the woods, not sure really where she is going only to find that once she is there, she and her father appear to be the only form of life left.

Years later in London, Peggy reflects on her time in the place they call ‘The Divide’ and shares the full story of what really happened out there.

The place they call Die Hutte – a special place that only her father knows about and a place which will keep them safe when the world comes to an end. Which it will as this is a dangerous time he tells her and he and his friends, fellow survivalists often meet up to discuss how and where they will go.

An adventure into the woods, over ravines and rivers might seem  exciting to a child but for Peggy, this becomes something rather different. At first the forest is like something from a fairytale, but as she and her father venture deeper into the woods and therefore further from civilisation, their path becomes more isolating and remote. Like Hansel and Gretel, they venture further and further into danger and isolatation.. As the fairytale progresses, the dark cloud akin to that found in the Grimm fairytales emerges and the cloak of darkness blackens the sky, Peggy even is given the name Punzel after Rapunzel in the famous book. Like her literary character, Punzel is trapped, wanting to feel love and affection, to be rescued in some way although she at the moment can’t find a way out.

The journey starts and ends in London, but like  Rapunzel’s tale and that of Hansel and Gretel, the setting and the journey and what really happened at die Hutte is the real mystery – solved if you follow the clues carefully enough.

You can tell Claire loves a good old fashioned tale and fairytales for this has a mix of Hansel and Gretel and Rapunzel plus even a few others from the Grimm Fairytales version of the stories. This is a magical jaunt and one very atmospheric and chilling. The fact you know Peggy narrates events from London after the event spoils nothing. This is graceful and haunting and I swear I could hear haunting flute music whilst reading. This world of Peggy and her father is also sad and when you realise what’s going on, it’s very sad in places. I felt immersed in this novel and on finishing was back in the real world. A bit like Peggy but with a real feel and longing for where I had been. And a bit of wish to go back there if I’m honest. A poetic story.