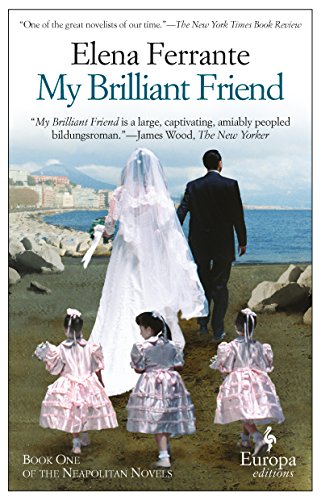 1970s: The First in the Neapolitan quartet

Beginning in the 1950s in a poor but vibrant neighborhood on the outskirts of Naples, Ferrante’s four-volume story spans almost sixty years, as its protagonists, the fiery and unforgettable Lila, and the bookish narrator, Elena, become women, wives, mothers, and leaders, all the while maintaining a complex and at times conflictual friendship. Book one in the series follows Lila and Elena from their first fateful meeting as ten-year-olds through their school years and adolescence.

Through the lives of these two women, Ferrante tells the story of a neighborhood, a city, and a country as it is transformed in ways that, in turn, also transform the relationship between her protagonists.

It’s true that Naples comes to life under the keen hand of Elena Ferrante and her quartet of novels. The unnamed “neighbourhood” where the characters grow up is fictional yet seems to very real and vivid.

They do move around the real city of Naples however and it’s this part that you can use as a guide to the raw and gritty side of the city.

The area where the girls grow up is based on working class Rione Luzzatti, not usually a part of the city tourist wander into, yet it’s the side to the city that captures the spirit of the Ferrante novels.

Head to the Aragonese city gates of Porta Capuana, just off Via Carbonara, and head into the pulsating heart of O’ Buvero street market. This is the heart of the underworld in the books. Feel the pulse of the city here! The character Ada Cappucino ran a fruit stall – maybe you can spot him here?

If you are after some of the rather potent volcanic liquid that Elena Greco was under when she first laid her lustful eyes on Nino Sarratore , then you can buy some in Corso Garibaldi.

This is the stradone of the books – the more salubrious side to the city in the novels. Along here you can see the novel come to life before your very eyes as people can be seen looking out of their apartment windows. These apartments are still the Fascist era ones described in the books.

Street food near the station

Signor Spagnuolo – Gigliola’s father – would have baked pagunitello for workmen at the nearby central station. Pagnutiello is a typical Neapolitan street snack made from eggs, ham and cheese, baked in crunchy bread and sold for €1.

Ferrante described men in bars who would spend their time “between gambling losses and troublesome drunkness”. Marco’s shop was situated next to the tobacconists on Via Buonocore.

Lila taught Elena her Latin verbs here in gardens like these

“The Tunnel with its three entrances”

Via Gianturco is where Lila and Lenù skip school and leave the neighbourhood to go and see the sea.

Have lunch at the Pizzeria Carmnella. The pizzaiolo, Vincenzo Esposito, has invented a pizza to celebrate Elena Ferrante

Via Tasso and the Chiaia district

According to  Lenù on the Chiaia residents:

They “seemed to have breathed another air, to have eaten other food, to have dressed on some other planet, to have learned to walk on wisps of air”.

As the Neapolitan novels prove, Naples is a city of vivid contradictions. Enjoy your search for Lila Cerullo, the missing protagonist.