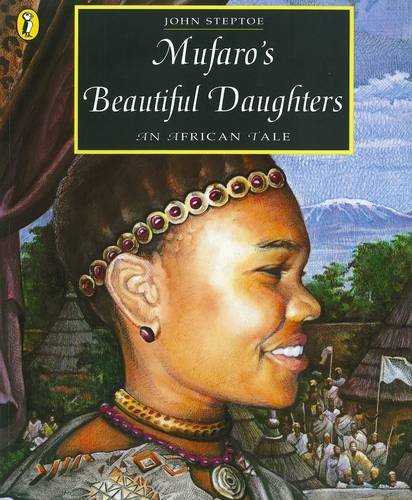 When a King wants a wife, he heads out amongst his subjects to find one..but in disguise

Mufaro had every right to be proud. He had two beatufiul daughters who were the envy of everyone. They were both striking and everyone noticed them. But beauty is only skin deep –  Nyasha was kind and considerate as well but Manyara was selfish, bad tempered, and spoiled.

When the king decided to take a wife and invited “The Most Worthy and Beautiful Daughters in the Land” to appear before him, Mufaro declared proudly that only the king could choose between Nyasha and Manyara. Manyara, thinks she should be the one to marry a king and so goes out of her way to see this happen

The ruins can be seen in the ancient and ruined city of Great Zimbabwe located in the south-eastern hills of Zimbabwe near Lake Mutirikwe and the town of Masvingo. It was the capital of the Kingdom of Zimbabwe during the country’s Late Iron Age apparently!

The rich drawings look almost like the author has gone back in time and took photographs of the the time and place. The rich colours, the ancient monuments just jump from the page and are gorgeous as well as interesting!

The meaning of the names is also interesting.

These are the meanings from the old Shona language