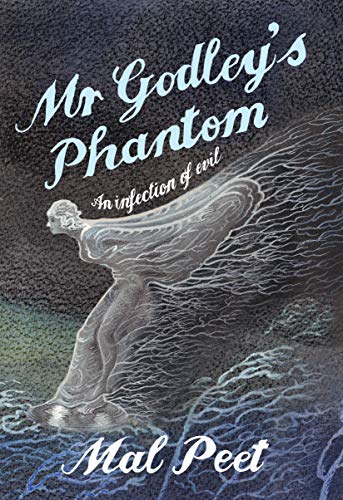 It’s 1945 and Martin Heath, like many men at that time, is struggling to settle, to find his place again after the horrors of war. But an old comrade sends him a letter, telling of a position that’s just come up with an elderly fellow called Mr Godley in the deepest and loneliest part of Devon. Martin travels there and so begins a dark mystery…

The setting is clearly Devon even though the large, old Burra Hall is a mystery that doesn’t seem to be on any map……

Burra Manor of course is not real. It’s where Mr Godley lives with his phantom car. Apt names which create a sense of foreboding even before the talk of war, PTSD and loneliness here on the moors.

When Mr Godley takes the train from Okehampton to Exeter, he goes missing and so the police from this area are drafted into make sense of the mystery. The search extends along the coast to the sights of Orcombe Point and the Exmouth Beach. You can imagine taking the train along here and walking along the cliffs, looking out to sea. The weather is brash and the evenings dark  but the very idea of driving fast along the twisty country roads in a classic Phantom car no less, more than helps set the scene of a novella at the heart of the British countryside.

Imagine then, a film projector in this old house, filtering black and white images of the past, flickering memories like those of an old man trying to hang on to them:

“The projector whirred. The images flickered, steadied. He could not stop them. Lucky sobbing obscenities while forcing SS women, his pistol to their heads, to drag bodies to mass graves. The silent skeletons, who yet moved on legs of bone, walking towards him, slow as dreamers but all eyes. The others, heaped, skulls muddled with shin bones, claws, shrunken genitals. Shit and slurry and decomposition. Martin had felt neither rage nor even revulsion. Rather, it was like discovering that he had contracted an incurable disease; that, having inhaled the miasma of death, he could never be well again. That his heart might eat itself.”

I adored this book. Well it’s more like a novella given its short length but when it dropped on the mat, it took me back to the days when books had paper jackets and my mum would take me to flea markets and the libraries and I would hunt for  forgotten titles. It’s a gorgeously packaged and quite small in size, so when you hold it, you know it’s unique from the start.

First of all, the setting – this was like driving along those rural Devon roads taking in those winding country roads, small country villages, remote country homes and the wonderfully strong sense of place which takes in the essence of that part of the world. Some actual locations are vague or fictional but that just works even better for the story.

There are two main characters so together with the landscape, the sense of isolation and claustrophobia is brilliantly done. As for the plot, well there’s not that much I can stay without hinting at what takes place. No, there’s really not much I want to give away. It’s there to discover and there’s small snippets of information which settle in the book like leaves on the wind – so there are calm moments which are then whipped up to a frezy before settling down…only to wait for another unsettling breeze.

This is  a short yet memorable novel which touches upon themes of mental health and the need to move on. The Phantom of the title…well that was a treat to discover.

A hauntingly good read. And when you realise that the author is no longer with us, very poignant too. Recommended.