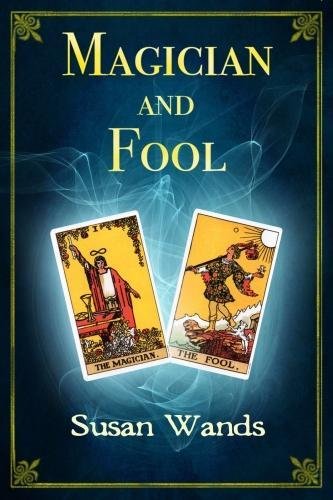 1880s: A fictionalised tale of the woman who illustrated the Waite-Smith deck of divinatory tarot cards

Pamela Colman Smith begins her career as an artist at the end of the Victorian Age at the Lyceum Theatre, where she grows from innocent empath to seer and channeller; creating her now world-famous deck of tarot cards. Introduced to The Golden Dawn cult by Bram Stoker, the second in command at the Lyceum Theatre, she is commissioned to create a tarot deck for the members to use in their quest for magic. Golden Dawn’s most evil member, Aleister Crowley, becomes obsessed with unlocking the mysteries of the Tarot. His obsession peaks when he sees the power of her deck and realizes he can create a rival deck, leading him to manifest magical power to harm Pamela’s incarnates of her cards.

London and its magic:

This theatre is at the centre of the novel. This is where Patricia spent much of her time:

In 1899 her father died, leaving Smith an orphan at the age of 21. She started work in theatrical design for a miniature theatre. In London, she was taken under the wing of the Lyceum Theatre group led by Ellen Terry (who is said to have given her the nickname ‘Pixie’), Henry Irving, and Bram Stoker and traveled with them around the country, working on costumes and stage design.

The rest of the city is described in sights, sounds and smells:

The carriage arrived at Covent Garden where the singsong, hawking ad calling of wares deafened even from inside the cab”

They are keen to see this bridge, “the finest stone bridge in the world” with Bram Stoker. “Waterloo Bridge looked majestic and powerful; the Cornish granite gleaming through the gathering fog, its nine arches hunched over the outgoing tide”

There’s a lot of interest in some of the exhibits in one of these rooms. The officials and experts gather to examine some of the curiosities which surface during the investigation. Be sure to visit the Egyptian Room as they meet here in the novel.

The Savage Club at the Savoy Hotel had just opened …the four men eat down in the leeather – tufted club chair in the eleborte dining room. The air was filled with smoke…”