Love And Other Consolation Prizes 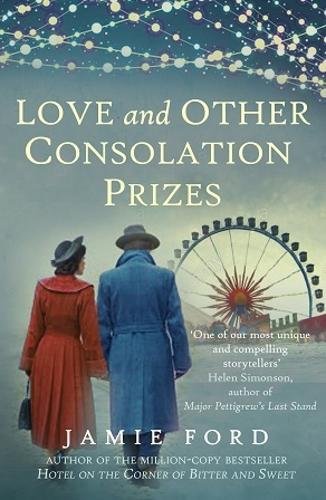 A half-Chinese boy called Ernest Young is sent on a boat from China to America to be raffled off as a prize. The author states this was a common practice at the time. He’s not the only child on board – the others are also headed to auction, to become servants of one kind or another.

Ernest ends up working in a brothel in Seattle’s famed Red Light District and begins working for the Madam. Soon, he falls in love with Maisie, the flamboyant madams daughter, and also Fahn, a karayuki-san, a Japanese maid sold into servitude.

1962 –  On the eve of the new World’s Fair, Ernest looks back on the past, and reexamines his life, noting the effect on his family and his wife who is now suffering from dementia. Somethings however you can’t ever forget..

This is the fascinating and important stage of the World Fair. The present day story takes place in 1962 when the World Trade Fair is taking place and Ernest thinks back to when it first began in 1909 and was called “The Alaska-Yukon-Pacific Exposition of 1909”.

This was the huge event of its time.  It set the scene for so many new inventions, hopes for the world’s future, new ideas, new hope for medicine (incubators for babies were being presented) and new scope for electricity and wireless communications. There was talk of the Wright brothers, and other historical events which more than put the fair into fascinating context.

Perhaps one of the most fascinating exhibits was an entire village  set up and populated with people from the Philippines.

The author states that the story of children being bought and auctioned off at the fair for the price of a ticket were true. Imagine being torn from your home land, sold into goodness knows what and sent half way across the world into the unknown. Child abuse and torture is rife. This is a rough cruel Seattle

The city comes alive with the sights and sound s of a city excited by this new arrival – the city is buzzing, separated into the haves and the why nots due to the separation of wealth.

Tenderloin – the slum area of the city at the time. This is referred to a lot  in the novel as its where the newcomers live, where the why not’s live and work for the haves.

Pay Streak – The gaudy, wooden boardwalk of the Pay Streak, there were human exhibits

“The AYP had revealed Seattle to the whole nation”

The time has come to look at what the World Fair has achieved and its legacy. Interesting that Ernest’s daughter writes to compare this fair and the first one. Ernest was present at that fair, sold into what could have been oblivion.

Museum of History & Industry (MOHAI) – You can see exhibits of photos from the fair. Many are the work of famed photographer Frank Nowell, who was the official fair photographer.

spaceneedle.com/home  – Built in 1962, the Space Needle has since become the symbol of Seattle, and one of the most recognizable structures in the world.

Very moving and utterly fascinating. A true story I really couldn’t believe was based on real life situations. A child sold at the first Seattle Trade Fair tells his story years later at the 1967 fair when the Space Needle has just opened.

This is one fascinating and heartbreaking read. The history is detailed, well researched and so well woven into the story line. The author is of Chinese heritage himself and what a lovely way to pay homage to your heritage and culture.

The arrival of the fair in 1909 and the fair of 1967 and the stories between them – this is like a snapshot of Seattle and world history between those years and so much has happened – on the cultural, political and scientific levels. I felt I was at the fair, I could feel the excitement, anticipation and wide eyed wonderment. Taste the cotton candy and hear the roar of the crowd.

This HAS to be a movie. It’s an epic read with so much heart and emotion. It still makes me well up thinking about it now. Jamie Ford you’ve written a book that has touched so many emotions, made me cry in shock and in tears and one that feels like a literary legacy of many kinds. It’s a beautiful , beautiful book.