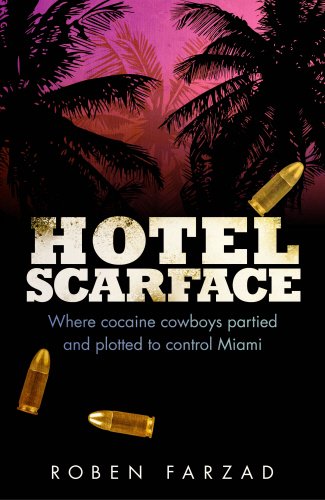 1979. Lock your doors. Watch your backs. Raise your glasses. Miami is about to blow, in a fiery explosion of cocaine, blood and bullets,

Behind the bar at the Hotel Mutiny, the hottest ticket in town as the clock approached 1980, waitresses and bellhops were stacking whiskey totes full of the white stuff. The tips — pure cocaine packed in hundred-dollar bills — were sluicing in. Everyone was trying to bribe their way to a coveted New Year’s Eve table at the hotel’s swanky, members-only Club, desperate to sit among the star-studded guest list, and to party with America’s biggest cocaine kingpins.

The Mutiny was a real place and that the characters in the book were real  figures in the drugs trade. In fact there is even a role call of sorts at the start of the book

These are the days  of the great Drug Barons – before the days of Pablo Escobar, when Cuban immigrants were the major players of the drugs trade across to Miami. The club where they all met, and where the major deals were done was well known to everyone but seemingly untouchable.

“They were Miami’s ruling drug lords. With bullets flying everywhere there at all hours of the day, the town was increasingly being called Dodge City. And so these guys were it’s “cocaine cowboys” the Latin masterminds of the era’s go-go wonder drug: yeyo, perch, toot, snow, white pony. Cocaine. And The Mutiny was their favorite saloon.”

It was the era of decadence – Friday night net profits were apparently in the region of $60,000.