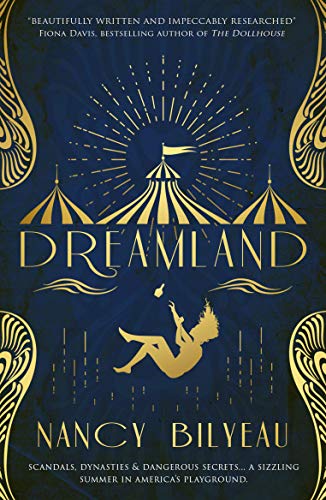 The year is 1911 when twenty-year-old heiress Peggy Batternberg is invited to spend the summer in America’s Playground.

The invitation to Coney Island is unwelcome. Despite hailing from one of America’s richest families, Peggy would much rather spend the summer working at the Moonrise Bookstore than keeping up appearances with New York City socialites and her snobbish, controlling family.

But soon it transpires that the hedonism of Coney Island affords Peggy the freedom she has been yearning for, and it’s not long before she finds herself in love with a troubled pier-side artist of humble means, whom the Batternberg patriarchs would surely disapprove of.

Disapprove they may, but hidden behind their pomposity lurks a web of deceit, betrayal, and deadly secrets. And as bodies begin to mount up amidst the sweltering clamor of Coney Island, it seems the powerful Batternbergs can get away with anything… even murder.

Travel back to the magic of Coney Island, Dreamland in the Gilded Age

The story takes place in 1911 in Coney Island. The main character is an American Heiress, Peggy Battenberg and she lives in a grand house not far from the place that is going to change her life.

Also known as America’s Playground. Imagine this place in 1911 with it tones of the Gilded Age? A young girl comes here and is struck with what she sees and experiences.

Peggy Battenberg is a young heiress who has been invited to the Oriental Hotel close by this playground. She is an heiress and things are expected of her. But Peggy is destined for a different kind of journey. She is a privileged woman ahead of her time.

The setting and the time period come to vivid life. Dreamland is a wonderful place to explore through the eyes of a young girl in its heyday.

Imagine being Peggy – a girl who spends the summer surrounded by books. There is a bookshop in coney island so you can go there and pretend it’s the Moonrise!