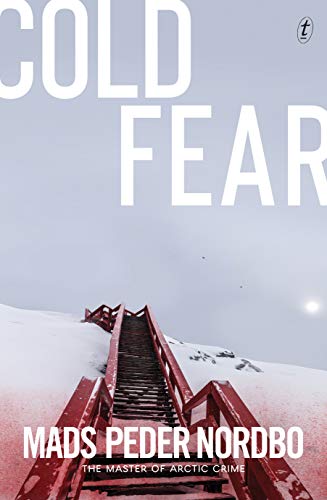 2000s: Sinister secrets, all set against the bleak, yet oddly beautiful, Greenlandic landscape.

When Danish Journalist Matthew Cave’s half-sister Arnaq disappears, leaving behind only a trail of blood, he realises they are both pawns in a game of life and death.

As a young US soldier stationed in Greenland, their father took part in a secret experiment with deadly consequences. Accused of murder, he was forced into hiding.

Desperate to discover the link between these two disappearances, Matthew is joined by Tupaarnaq, a young Inuit woman, who returns to Nuuk to help her only friend—and to settle a few scores of her own.

But, as things begin to unravel, Matthew begins to wonder: Is the father he has been searching for his entire life actually a cold-blooded murderer? And is Tupaarnaq really who he thinks she is?

Cold Fear involves political infighting, the argument of separation with Denmark and corruption all the way. This is the land of underground buckers, a missing man who may not be missing and all on the remote, whitewashed land of Greenland…

“The autumn wind swept across Nuuk clear and clean. It was only a few degrees above zero; a couple of days earlier violent storm full of lashing rain, had squeezed the last signs of life out of the late summer. The mountains had wept as never before and the water cascading down had created wild waterfalls everywhere.

“The sea between the small town of Tasiilaq and the mountains on the far side of the fjord was filled with floating growlers of glacier ice. Some had foundered on the shore;others moved slowly with the tide. Long tongues of snow had settled down the mountainsides, several reaching as far as the sea. Soon everything would be buried in white.”

“In Tasiilaq people turned a blind eye to everything, although everyone knew what was going on.”