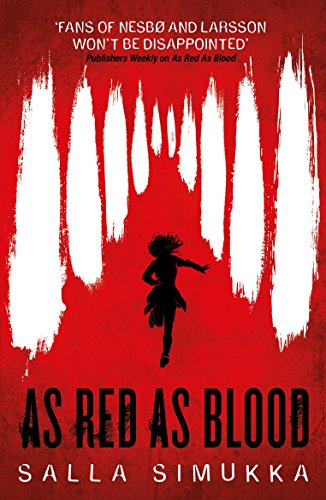 The first story in the thrilling Nordic crime series The Snow White Trilogy,

The streets of Finland are frozen and white with snow. And nothing is as red against snow as blood . . . Seventeen-year-old Lumikki Andersson is hardly your average teenager. She lives by herself in the city of Tampere, Finland, and has a firm rule to mind nobody’s business but her own. But that rule is put to the test when she happens upon five hundred washed euro notes hanging up to dry in her school’s darkroom, and it is shattered once Lumikki realises who owns them.

Caught in an increasingly tangled web of deception, corruption and danger, Lumikki finds herself navigating Tampere’s dark underbelly in her quest to expose its shocking connection to the international drugs trade. Lumikki is smart, but is she smarter than a master criminal? Can she bring down the infamous ‘Polar Bear’ – or will she become another one of his victims?

The books are fantasy and so many of the locations are vague but there are a few gems where you can really go and visit. Tampere is also the city where the author lives and works, so you really get a sense of her inspiration and the essence of the books.

Book three – “The park even had Finland’s biggest poplar tree. Under different circumstances, Lumikki would have though it the best park in Tampere.”

Book three : “Lumikki knew that if she moved to the base of one of the arches that made up the vaulted ceiling of the Tampere City Library…..”

All books: The forests in and around Tampere

“This was Lumikki’s forest. The branches  were black shadows; the black shadows were branches. Tree roots coiled along the ground like snakes before diving underground to form a wide,thick network.”

“The forest was a game of shadows, a dance of dim light and mist, hushed whispers and sighs, passing currents of air that made the hair on her arms stand on end.”

Art is of course a major theme in all three books and the perfect chance to show off Tampere’s art colleges,museums and more!

She has happy memories of going here as a child. Always nice to see a character having such good taste