A View Across the Rooftops 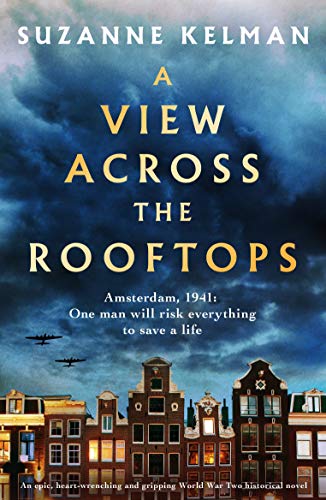 1941: A man goes to extreme measures to protect his Jewish  friend in Nazi Germany

University professor Josef Held has never recovered from the loss of his beloved wife – and has no intention of ever letting anyone new into his quiet, safe world. It is a world where the clock ticks steadily in his mathematics classroom, even as the sinister beat of Nazi soldiers’ boots threaten to drown it out.

Terrified, Josef tries to keep his eyes on the ground as Jews across the city are forced into ghettos. But then Michael Blum, his most reluctant, infuriating pupil, tells Josef Jews like him will no longer be allowed to study at all. Josef can ignore the situation no longer. And, after the shock of seeing his neighbour killed on his own doorstep, he offers Michael a place to hide in an impulsive act of courage.

Michael is everything Josef is not: spontaneous, poetic, and unafraid to love. Even though his passionate relationship with a Dutch girl is strictly forbidden – for he is Jewish, and she is not. Somehow, in the quiet gloom of the attic, Josef doesn’t mind things about Michael that annoyed him in the classroom, and a bond begins to grow.

Remembering the pain of his own heartbreak, Josef is desperate to give Michael and his girlfriend a chance. He must go on as if nothing has changed: teaching his class, bowing to the Nazis. Beneath the fear, a thrill of defiance begins to bloom. But then Michael becomes perilously ill, and there is no way to get him the help he desperately needs.

This is based on a remarkable true story. The author discovered the story when researching and soon discovered that more than 30, 000 Jews survived the war by hiding in people’s houses, basements and attics. Of course, the most famous story is perhaps, Anne Frank and her family, but this story is just as remarkable.

The horror of that time is evoked well and makes for heartbreaking reading. Each character has their own experience of the war, and takes risks to survive but it’s the maths professor who takes the biggest risk of all. How far would you go to save someone else realising that if you are discovered you will both die?

Amsterdam and the way of life suffered by Jews is well-documented but this novel brings in the human heartache and morality issues many people faced.

There is mention of the Hongerwinter – a terrible time when people were forced to eat tulip bulbs and wallpaper just to survive.

Booktrail Boarding Pass: A View Across the Rooftops