A Tall Man in a Low Land 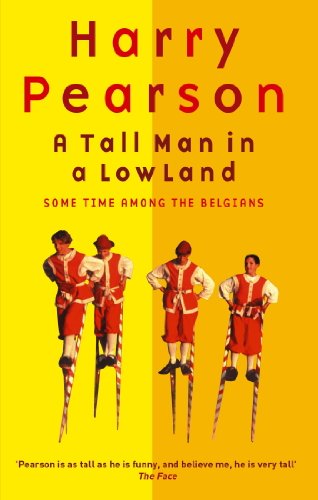 1997: For anyone that thinks Belgium is just about chocolates and beer. A booktrailer lived there and recommends Place Jourdan for the best French fries this side of… well, Belgium with Andalouse sauce!

It’s probably fair to say that Belgium often gets overlooked in travelogues for the fact it’s small, tucked away between France and the Netherlands. What is Belgium known for? Waffles and beer? Prepare to be surprised as Harry Pearson is your ultimate guide.

The most famous monument in Belgium is a statue of a small boy urinating. What other oddities and interesting facts can Harry Pearson discover? Well, quite a few as it turns out. Having lived in Belgium for several months, he totally immerses himself in the local culture – drinking beer, attending a festival of shrimps and goes to a museum which is… pants.

When many travellers set off for foreign climes, those on the hotter side of the equator are often the destination of choice. On the search for adventure, sun and a little bit of danger no less, and Belgium is not the most obvious choice of destination for these travel needs.

But you know what they say, it’s the quiet ones you have to look out for and where Belgium is concerned this is exactly what any discerning traveller should do. For a small country which is often called boring, it has a surprising number of shocks in store.

Take the Mannekin Pis – yup it really is as ‘bad’ as it sounds and the ‘occasions’ where they dress it up to mark national day or some event doesn’t make it any more charming. The girl version is ten times worse however. Still needs to be seen to be believed. And have you ever been to a museum that is quite literally pants? This is one museum experience we won’t forget in a hurry.

Belgium is a wonderful yet misunderstood country at times and reading this book where someone applies his own brand of observation and informal guide is much better than any guide book you will read.