A Long Night in Paris 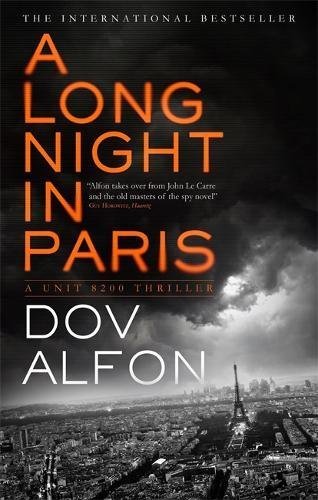 2000s: An Israeli man goes missing from a Paris airport

When an Israeli tech entrepreneur disappears from Charles de Gaulle airport with a woman in red, logic dictates youthful indiscretion. But Israel is on a state of high alert nonetheless. Colonel Zeev Abadi, the new head of Unit 8200’s autonomous Special Section, who just happens to be in Paris, also just happens to have arrived on the same flight.

For Commissaire Léger of the Paris Police coincidences have their reasons, and most are suspect. When a second young Israeli is kidnapped soon after arriving on the same flight, this time at gunpoint from his hotel room, his suspicions are confirmed – and a diplomatic incident looms.

Back in Tel Aviv, Lieutenant Oriana Talmor, Abadi’s deputy, is his only ally, applying her sharp wits to the race to identify the victims and the reasons behind their abduction. In Paris a covert Chinese commando team listens to the investigation unfurl and watches from the rooftops. While by the hour the morgue receives more bodies from the river and the city’s arrondissements.

The clock has been set. And this could be a long night in the City of Lights.

Travel BookTrail Style to Paris with the author

I chose the Parisian locations that could be the best backdrop for the chase. The deadly quest brings out the relationships between the hero and the itinerary he follows, and the light they shade on each other.

A key scene takes place in Rue Rabelais, a tiny street with more surveillance than the Elysée palace, and for a good reason. And so on – the hotels, the restaurants, the sights and the buildings described in the book all carry secrets.

Secret and unique place – probably the most secret spot in Paris: Cour de Rohan, three successive courtyards full of enchantments, dating from the 15th century. Like nesting Chinese boxes, each of the courtyards reveals new jewels as it unfolds before the visitor. But the sight is little-known because the influential residents managed to declare it private.

Most of the Israeli locations are top-secret intelligence bases I served in, so the descriptions were written from memory. As for Paris, I currently live here, and like my hero, I’m half-French really, so research involved choosing the spots that could fit the intrigue, or places I have a strong personal connection to.

I don’t read a lot of spy thrillers as I find them a bit confusing and full of insider knowledge that only someone in the field would get. This is different I am happy to say. There’s a lot to like and a lot to make you gasp as you wonder what’s true and what’s not.

The author has worked in the field and it shows. The opening ‘sequence’ (as this could easily be a film) was taunt and gripping. Lots of red herrings, mistaken identities, mayhem and murders.

I also felt I learned a lot about the Israeli secret services and how they work together and with other national departments. The novel largely takes place in Paris and there’s some brilliantly creepy and secret locations used here. However, the mysterious Israeli Unit 8200 military intelligence corps (they do seem to fight and squabble a lot!) and a Chinese criminal gang lurk in the background to ramp up the tension and the suspicion.

One of the things I really found interesting were the snippets of tourist information and thoughts, political ideas and more to illustrate part of the story. Clever way to inform and entertain. Definitely makes this a spy thriller with heart and soul.

A multilayered spy thriller which would make a gripping film too.