A Dangerous Act of Kindness 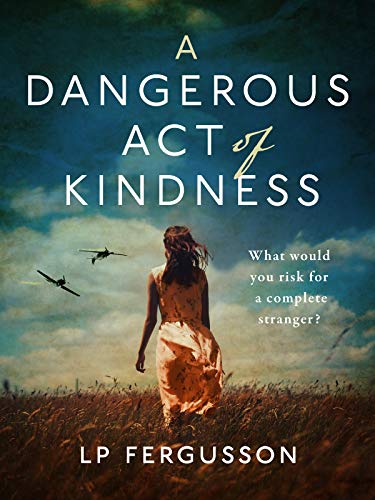 2000s: What would you risk for a complete stranger?

When widow Millie Sanger finds injured enemy pilot Lukas Schiller on her farm, the distant war is suddenly at her doorstep. Compassionate Millie knows he’ll be killed if discovered, and makes the dangerous decision to offer him shelter from the storm.

On opposite sides of the inescapable conflict, the two strangers forge an unexpected and passionate bond. But as the snow thaws, the relentless fury of World War Two forces them apart, leaving only the haunting memories of what they shared, and an understanding that their secret must never see light.

As Millie’s dangerous act of kindness sets them on paths they never could have expected, those closest to them become their greatest threats, and the consequences of compassion prove deadly

The author wrote this book as she was fascinated by a story she had grown up with, about a Luftwaffe pilot who had crashed and survived during the war. He was the only German POW to do this and he made history by hiding out in the Lake District before being deported to Canada.

The author lives in Oxfordshire and is a member of a local history society where she learned that a German fast bomber had crashed close to her village during the war as well and all the stories from her past came flooding back to her. She had to write a story about a crash like this and what would happen to a soldier if a local woman found him.

“Even today, the countryside at the top of the Downs is like another world, remote and inaccessible. When bad weather closes in, the small number of houses up there are completely cut off.”

What a humdinger of an emotional read!

What would you have done if living during the war on a farm and a pilot crash lands in your field, If you take him in, you could be seen as a collaborator and put to death. But what happens if you just leave him? He’ll die out there…

The woman in the book takes him in – the dangerous act of kindness – and that creates a bubble which slowly becomes romantic..but then all bubbles burst and this one could kill..

I was all over the place with this novel. Emotionally speaking I was a wreck! When you think you’ve read all the stories you can about the Germans and the war, this is a very unique novel and a very unique set of circumstances. I’m not going to lie – there were some very tough scenes to stomach and when you realise just what these atrocities actually entailed….that one word, atrocities, has so many meanings here and it, they will break your heart.

This novel also looked at the difficult situation of how some Germans proudly played a role in the war. They saw it as their duty and the duty they owned to their country. Now, this in the modern day sounds barbaric – and it was then – but this novel places you back in the time and place and really shakes your emotions around that thought. Is it not similar to what some people do now when they have such a strong belief in their ’cause’ ?

The relationship of Lukas and Millie was heartbreaking and that word again – emotional – but it was Lukas who interested me – how they treated him before and after, Millie’s reactions to it all and the role the Lukas of this world played in the war at the time.

There is some impressive research in this novel and the author explains a little at the end how the story came to be which is equally good to read.

Tissues at the ready but read this book!