Sewing the Shadows Together 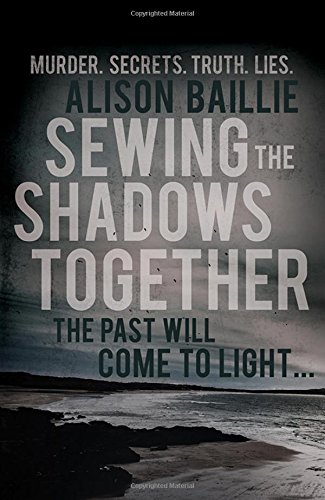 2000s: In the seaside suburb of Portobello, Edinburgh, a dark secret from the past hangs over the present

30 years ago, Shona McIver was raped and murdered in Portobello, the seaside suburb of Edinburgh. A crime which has cast a shadow over the area and the family ever since. Brother Tom and best friend Sarah in particular have never forgotten that dreadful day when their Shona died and their worlds came crashing down.

Now, modern technology and DNA show that the man who was convicted of killing Shona could not have committed the crime. So who did? And what does this mean for Shona’s friends and family?

“Portobello had not changed much in the last thirty-seven years: the wide sweep of the bay, the faint distant coastline of Fife and the huge pale sky.”

“The sense of community is very strong in Portobello, and it is one of the reasons I loved it, especially as a child. My grandparents had both been born and brought up in Portobello, so they seemed to know everybody and we had relatives on every corner.”

“My favourite places have to be the beach and the prom. When I go back to Portobello now I always walk there, looking across the Firth of Forth to Fife and smelling the sea air. Sewing the Shadows Together starts with Tom coming back to Portobello and walking along the prom and for him like me the place is full of memories, such as the red-stone swimming baths where we learnt to swim.”

Real life events which led to the book

“Firstly, in 1977 two seventeen-year-old girls disappeared from the World’s End pub on Edinburgh’s Roval Mile. I knew this place well as it was near Moray House College where I had done my teacher training. Then in July 1983 something happened in Portobello that affected me deeply. A five-year-old girl disappeared while playing on the prom. Her body wasn’t found until twelve days later, three hundred miles away. She was one of the victims of the serial killer, Robert Black. ”

Tom McIver, Shona’s brother returns from South Africa, the very warm and scenic Plettenberg Bay,a coastal village. He thinks back to how he enjoys driving along the scenic garden route, seeing the sky change colour but then is brought back to reality with the “fishy Scottish air”

Eriskay in the Outer Hebrides

Herds of white wild Eriskay ponies wandered freely over the roads, knowing that every car would stop for them. At each house they were welcomed in
Island life. Tom meets old relatives, delves into his own family history and in particular that of his father as he spends time to scatter his mothers ashes and remember her homeland. This is a rural, windswept place, the silver water of the Eriskay sound and the traditional wooly jumpers. With hills of ancient rock and Eriskay, South Ulst and Barra having remained catholic whilst other islands became protestant, religion tradition and community are important here. 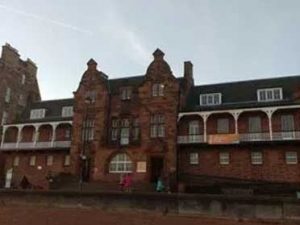 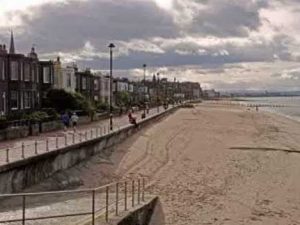 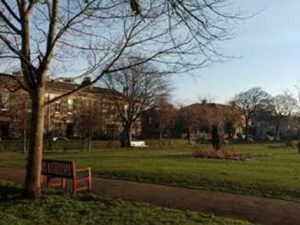 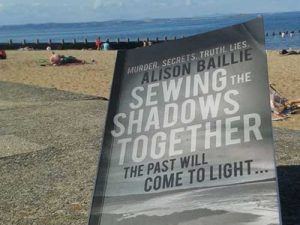 Set in the beautiful seaside suburb of Edinburgh Sewing the Shadows Together shows us a beautiful setting as the backdrop of a horrible crime, that of the murder of a young teenage girl, Shona McIver.

Shona and her friend Sarah were in Abercorn Park when she rushed off having told her friend she had a secret. Sarah waited but Shona never reappeared, not that evening, not ever. But who else was in there and can the mystery possibly be solved more than thirty years later. Tom, Shona’s brother, hopes so having heard that the man who committed the crime is to be released from hospital which coincides with his return from South Africa to scatter his mother’s ashes and to attend a school reunion.

We not only have a superbly plotted book, split between past and present but we get to meet some wonderfully varied characters. There are a surprising number of potential suspects who could have been part of the secret that Shona mentioned on the evening she disappeared. The result for the reader is many theories built and swiftly dashed to smithereens as another smidgen of information is revealed; just the kind of plotting I most enjoy.

There is no doubt in my mind that Alison Baillie is not only able to weave a convincing story but is able to make you feel as if you’ve visited the places themselves. Amazing as I have no first-hand knowledge of any of these settings.

I was, of course, attracted to this book given the prominence of Portobello in the story. Alison used to work in Portobello and still has relatives and friends here so is very familiar with the area. I really enjoyed knowing exactly where her characters were and being able to place them precisely. Alison says at the back of the book that she has played a bit free and easy with the geography of the area and she has changed some names such as the High School. This actually added to my enjoyment as I played detective, working out what places had been changed.

This was an excellent read, with the tension building up nicely, with well developed characters and a excellent sense of place. All the loose ends are drawn together adeptly at the end in a convincing and satisfying conclusion. A promising new voice in Scottish crime writing and I hope to read more from Alison before too long.