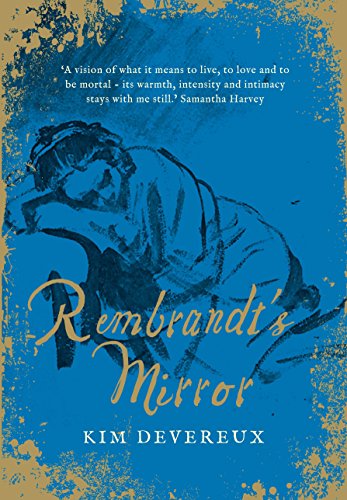 1647: The story of the man behind some of the most famous paintings in the world from the women who knew him the best.

Rembrandt’s wife is dying and her final days continue to haunt the artist long after her death. Geertje is his housekeeper and ultimately secret keeper for there are many secrets in that house and within the man himself that no -one not even those closest to him can break.

For when Hendrickje, a girl from a strict Calvinist family comes to work there, she sees the sexual relationship develop between Rembrandt and Geertje. Shocked and excited by what she sees, she is drawn to the man herself and soon she will discover if her involvement with him will be her downfall or her salvation.

Rembrandt’s Mirror explores the three women of Rembrandt’s life, and the towering passions of the artist, seen through the eyes of his last, great love, Hendrickje.

Rembrandt was a man of pained passion, obsessive love for his art and a confused and tortured soul. If you want to know the man’s story then you have to look at his paintings for they are his mirror. The chapters named after titles of his painting show how he came to paint them and see his story unfold…

Some of the paintings and characters in the novel revealed by his paintings..

The Supper at Emmaus (1648), Louvre, Paris, signed and dated

Self-Portrait by a Window (1648), Rijksmuseum

The Anatomy Lesson of Dr. Nicolaes Tulp (1632), Mauritshuis, The Hague

Rembrandt’s Amsterdam is one of hardship and debt. He sees his first wife Saskia die and then is tormented by his relationship with Geertje. Her story is a hard one and his treatment of her forces her from her home and her life with him. It is said to be her who features in the painting “A Woman in Bed”

Troubled, she sums up her knowledge of Rembrandt-

“…It’s not always easy to make sense of his majesty”

Rembrandt comes to life of the page and you can smell the paint of the workshop, feel it on your hands as you turn the page, the sweat and toil of his work, the pain of his suffering when Saskia passes away and the threat of the plague.

This is also a very visual and sensual novel – you can smell both the canals and the tulips in the city, both revealing their secrets, the earthy perfumes pervading every word,…
The owners would have to keep a watchful eye on their pricey flowers for they were a thief’s favourite (Winter painting)

What kind of life did these women have in Rembrandt’s Amsterdam, his house and ultimately his bed?

Rembrandt has painted his city in all its colours and this is the literary version of that artwork.

Oh the writing is like the sweeping brush strokes of an artist who paints with words. When I read that the author is an award-winning short-film director and producer of documentaries, then you can definitely see this in the writing an the cinematic feel of the novel.

Like many people I admit to knowing little of the man himself but by weaving fact and fiction together I could visualise everything about his life and the women he loved. The man behind the mirror – whose painting reflect everything he saw felt and imagined, telling his story via the paintings and showing how he came to paint them and know the people in his life, who them became his subjects  – is a very unique way of allowing us to meet the real Rembrandt.

His world is one of debauchery, debt and hard living but also one of art and all that his paintings entail. He teaches whilst feeling tortured at home. I was in Saskia’s shoes, and then Geertje’s and then finally Hendrickje’s and it was like walking through one painting to another and seeing behind them, inside their world, seeing what Rembrandt must have seen.

Fascinating and a remarkable read. So evocative of time and place but also another world. Luckily evoked in paintings around the world and now in this novel.

Must be a film surely!