Always In My Heart 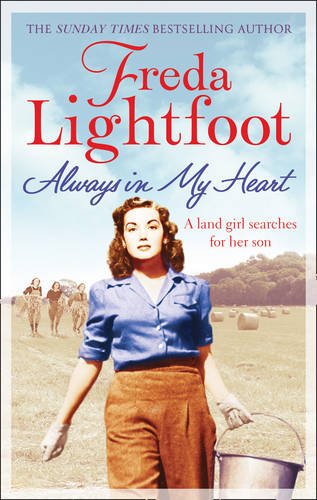 2ww: A land girl searches for her son

Life has been difficult for Brenda Stuart over the war, having been held in an internment camp in France simply because of her nationality. Thankful that her son at least was safe in the care of his grandmother, she now finds that she has lost him too, and her life is in turmoil.

Prue, her beloved sister-in-law, is also a war widow but has now fallen in love with an Italian PoW who works on the family estate. Once the war ends they hope to marry but she has reckoned without the disapproval of her family, or the nation.

The two friends support each other in an attempt to resolve their problems and rebuild their lives. They even try starting a business, but it doesn’tprove easy.

Fictional of course yet the villages of Trowbridge, Oldfield and Greenfield are said to be somewhere around Manchester. Brenda is a Manchester girl through and through and as she returns to the Trowbridge Hall which is a place she both knows and loves yet also fears. It’s here where she has seen and experienced such trauma and heartache.

The farm house introduces us to Prue and the hard work she endures each day working on the land. She tends to the plants and finds strength in their growth and development. She’s been planning to go to horticultural college before the war broke out so this is her reality now

“Paris became a different place. Coupons were needed for bread, meat, groceries, clothes coal, everything. And hey were increasingly hungry and cold.Each day Brenda would join other local Parisians in the public squares to search for any scrapes of wood she could find to burn”

Finding a way out of Paris is difficult for everyone. British people had it bad as the German hatred of the British was clear for all to see in the city at the time. Some apparently are arrested for listening to the BBC.

Oh I do love stories like this – real heartwarming and poignant tales of real people, real women who worked hard and experienced so much trauma during the war. It reminded me a little of Philomena in some respects – the hardship women bear and deal with for years is quite remarkable. The stories on the front and in the camps is another thing altogether but for me it’s the everyday trauma that reveals the strongest of characters in these novels.

Brenda  was a very strong and likeable character. Others such as Prue were multilayered too and had more than one story to tell.  I could have had words with Melissa and Gregory mind.

This was a really unique and fascinating angle on the wartime saga story. So much unspoken. So many layers to this. And written in a lovely, heartwarming way. A homage in fact to the real Brendas and women of the time.

A novel of many emotions.